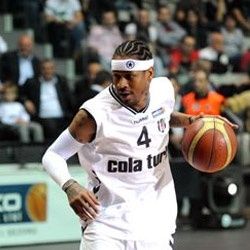 Allen Iverson and his Beşiktaş Cola Turka may finally have turned the corner in the 2010-11 season with a well-balanced attack and a fourth-quarter comeback against Asvel Basket in Turkey last night, 80-74.

Four Beşiktaş players – Cevher Ozer, Serhat Cetin, Fedor Likholitov and Mire Chatman – scored in double figures; Iverson added nine points while the Eagles got eight each from A.J. Ogilvy and Michel Ignerski. In coming off the bench for Beşiktaş, Chatman chipped in eight assists and six rebounds as well.

Most notable in this game, however, was Matt Walsh, who went for a sick triple-double of 13 points, 14 rebounds (all defensive) and 11 assists in under 38 minutes of court time for Asvel.

Official writeup follows the break; next up for Beşiktaş is to host Antalya on Saturday afternoon (4pm CET, 10am EST) in a key TBL matchup; Antalya (5-2) and Beşiktaş (6-3) currently stand at no. 5 and no. 6, respectively, in the Turkish league standings. Next Tuesday sees the Eagles travel to Serbia for a tough Eurocup match against KK Hemofarm Stada.

(EurocupBasketball) – Beşiktaş Cola Turka rallied to pick up its first win of the Eurocup season, beating Asvel Basket, 80-74, despite a historic performance from Matt Walsh. Asvel led by 15 in the second quarter and by 6 going into the fourth, but the hosts went on a 15-4 romp and held on down the stretch. Cevher scored 15 and Serhat Cetin 12 to lead the home team’s scorers, helping Beşiktaş improve to 1-2 in Eurocup play.

Mire Chatman added 11 points and 8 assists and Fedor Likholitov tallied 11 points and 9 rebounds for Beşiktaş, which visits Hemofarm Stada next week. Walsh locked up the fifth triple-double in Eurocup history with 13 points, 14 rebounds and 11 assists for Asvel. However, Walsh converted just 1-of-8 in threes and committed 6 turnovers. Andrija Žižić scored 17 for Asvel, Mickael Gelabale posted 15 and 8 rebounds, and Cliff Hammonds finished with 10 as Asvel dropped to 1-3 before visiting BG Goettingen next week.

The hosts went inside to Likholitov for a hook and the game’s first points before Gelabale’s fadeaway jumper put the visitors on the scoreboard. Allen Iverson scored in penetration and Michal Ignerski scored from the line to make it 6-2. Walsh took charge for Asvel, dishing twice to teammates for baskets and drawing an offensive foul from Iverson. Gelabale connected from downtown to cap an 8-0 run for the French side.

Likholitov narrowed the gap to 2 from the line, but Asvel kept pushing and soared to a 16-8 lead as Žižić hit from outside and on the offensive glass. Walsh twisted for his first basket and then Gelabale corrected a Walsh miss to make it 21-12 to Asvel after 10 minutes. Little Hammonds was the next Asvel player to score a second-chance bucket, giving his team a double-digit lead. Iverson got to the line, making one and soon coming up with a steal, but Asvel simply stretched the lead to 25-13 on a pair of Zizic free throws.

Leo Westermann drew an offensive foul from Chatman and a Kim Tillie free throw increased the lead to 15. An A.J. Ogilvy baseline jumper brought the crowd back into the game. Ogilvy soon stole a pass, tossing an outlet to Chatman for a layup and then Ozer scored from the line. The Beşiktaş defense locked up Asvel’s scorers and Ozer rose for a turnaround one-hander to make it 23-30, prompting an Asvel timeout.

Davon Jefferson fought for his own miss and scored, followed by Iverson committing his third foul and sitting for the rest of the half as the momentum switched back Asvel’s way. Ogilvy showed his skill with an offensive rebound and reverse layup, however, and Chatman then fed the big man for a two-handed jam. A missed triple for the visitors set up a Beşiktaş fast break that Ignerski finished with a rim-rocking slam to make it 34-31, Asvel. Asvel made sure to restore a more comfortable lead as Žižić scored inside and Gelabale converted a tough three-point play for a 39-33 lead at the break.

At the start of the second half, Iverson helped out on defense, grabbed a rebound and zipped downcourt, but missed a layup. It didn’t hurt Beşiktaş, though, which battled back through Likholitov and Ignerski; Iverson followed Chatman’s rejected layup to tie the score at 39-39.

Asvel bounced back as Walsh hit from behind the arc and Žižić sank a foul-line jumper. Jefferson attacked the basket for a three-point play to complete another 8-0 run by Asvel. Chatman finally sank Beşiktaş’s first three after 15 misses, only to see Walsh answer with a pretty jumper. Bekir Yarangume battled back for Beşiktaş, and Iverson created his own shot to stay within 6.

Two Hammonds free throws and a Yarangume slam made it a 57-51 Asvel lead going into the fourth quarter. Hammonds connected from deep but was matched by Cetin, who then set up Ozer to trim the gap to 4 points. Chatman made a three-pointer to give Beşiktaş its first lead of the night to the delight of the local fans.

After a free throw by Hammonds, Cetin nailed a second three from the corner as the crown continued to sing. A beautiful bounce pass from Chatman for an Ozer slam lifted the hosts to 66-61 and precipitated an Asvel timeout.

Gelabale scored on the offensive glass out of the TO, but the crowd broke into a new set of cheers when Ozer nailed a three-pointer. Likholitov from the line and Cetin with an and-one put the hosts up 8, the Eagles’ biggest lead of the game.

Bangaly Fofana scored inside, but was matched by Likholitov. Gelebale drilled a three and Walsh set up Zizic for a jumper to make it a one-possession game as Beşiktaş threatened to collapse in the fourth quarter yet again. Cetin sank a big three with 37 seconds left, but Tillie scored quickly to make it 78-74. Chatman was fouled and made one at the line. With the game on the line, the Beşiktaş defense stood tall: Yarangume poked the ball away from Gelabale and made a clutch free throw with 12 seconds left to put his team up 6 and practically seal the win.

Dec 8, 2010ballineurope
Powered by Sidelines
Share on FacebookShare on TwitterShare on Google+
Cyril Julian: From SLUC Nancy to oenology J.R. Giddens: Main goal not the NBA, but “to be the best person I can”