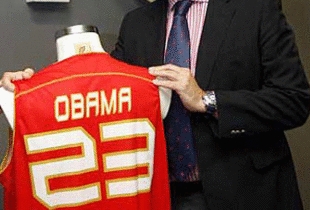 The Spanish Basketball Federation is reporting that coach Sergio Scariolo has finalized his 12-man roster, and that Carlos Suarez has been passed over for Caja Laboral’s Fernando San Emeterio.

Scariolo informed his team of the decision after yesterday’s 79-72 win over Team Slovenia in Ljubljana; he was quoted on the Spanish Basketball Federation’s official website as saying, “We said goodbye to Carlos Suarez with the feeling that with one more year of maturity and experience, he will make a step that will allow him, in my opinion, to be a major player on this team for many years.”

On Tuesday, Spain took care of business in Ljubljana in slightly different fashion than usual. Though the backcourt wasn’t especially impressive, the frontcourt foursome of twin-towering starters Marc Gasol and Alex Mumbru (who got the start at PF), plus Fran Vazquez and Jorge Garbajosa were basically unstoppable. This quartet of bigs combined for 51 points highlighted by 14-of-17 shooting on twos.

Sani Bečirović was Team Slovenia’s top scorer, with 17 points scored in under 27 minutes of play.

This weekend, Spain will be playing South American teams Brazil and Argentina in what should be some very revealing games – at least for the antipodean sides; figure Spain wins both handily.

Aug 11, 2010ballineurope
Powered by Sidelines
Share on FacebookShare on Twitter
This post was published on August 11, 2010
Prospect Dovydas Redikas signs with Lietuvos Rytas over Žalgiris Kaunas: Here’s whyRemembering the other two Dream Teams of 1992