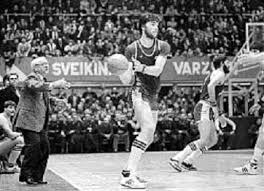 In honor of the legendary Arvydas Sabonis, the man Scottie Pippen once called “The greatest European basketball player ever to play the game,” entering the Basketball Hall of Fame, BallinEurope this morning reruns its career retrospective on the big man’s incredible career.

Quite a collection of rare Sabonis footage exists in the collective consciousness of YouTube, an ideal jumping-off point for that burgeoning bunch of basketball fans who never saw the man play or even experienced a world in which the Soviet Union exists.

Congratulations again to Sabas and thanks for the memories!

• 1979-1989 (and again from 2000-2005): Žalgiris Kaunas
From Sabonis first getting into the professional system with hometown club to courtside videocam shots of his final pro season back with his first team, this Lithuanian-language clip is loaded with rare footage.

• 1983: Team USSR vs. Team USA, FIBA “World Championship for Junior Men”
At the age of 18, Sabonis was introduced to the world at large in this youth tournament. Though the Soviet side managed a win against Team USA in the final round, Sabonis’ team lost in turn to Argentina and was ultimately beaten in the gold medal game by the American team.

• 1986: Team USSR vs. Team Yugoslavia, Team USA; FIBA World Championship
In two of the hardest-fought back-to-back games ever seen in this tournament, Sabonis nearly willed the Soviet Union through to victory against the USA in the finals after escaping with a one-point overtime win over an early version of *those* future NBA all-star teams of Yugoslavia.

Sabonis was named to the all-tournament team that year, along with Tikhonenko, Robinson, Drazen Petrovic and Oscar Schmidt – quite a dream team there, eh?

• Eurobasket 1989: Team USSR vs. Team Greece (and specifically Sabonis vs. Nikos Galis)
The Soviet Union once again steamrolled through the European competition, grouped apart from the other powers that year, Greece and Yugoslavia. In the semifinal knockout match, an excellent performance by Sabonis was not enough to overcome European legend Nikos Galis, who turned in perhaps this tournament’s greatest shooting performance to that point.

As YouTube user Skatastamoutrasas summarizes: “This is a video of the semifinal between U.S.S.R. and Greece back in 1989 in Zagreb, for the European championship! The final score was USSR-Greece 80-81. The video is concentrating on Nikos Galis from Hellas and Arvydas Sabonis from Lietuva and how these legends did in the game! Galis scored 45 points that night, making it one of his most famous performances with the Greek national side!

Yes, it is indeed the sort of game that induces exclamation points. Note how Sabas runs the floor on a bum knee; he was quick, eh? Plus, he’s got the Eye of the Tiger (actually released by Survivor in 1982).

• The 1980s: General Dawkinsian power
Before giving way to “typical” highlights of Sabonis’ awesome passing for the Portland Trail Blazers, this YouTube has some nice old footage from national team competitions, including Arvydas *smashing a backboard with a one-handed dunk* for Team USSR. Hey, did you know he ever did that?

• 1989-1995: Valladolid and especially Real Madrid, ACB
“After eight long seasons with the team that won three consecutive league titles,” explains YouTube user LeyendasNBA, Sabonis “decided to jump to the best basketball league in Europe, the ACB. He began with Valladolid, but soon the Real Madrid scouts fixated on him and signed him for three seasons…”

And in those three seasons, the big Lithuanian helped Real Madrid to one Euroleague championship, one Copa del Rey and two ACB titles. Individually, Sabonis was twice named ACB MVP, twice the ACB finals MVP and once the Euroleague Final Four MVP.

• 1995-2003: Portland Trail Blazers
Nine years after selecting Sabas in the 1986 NBA Draft, Portland was finally able to welcome him to the USA for the 1995 season.

Unfortunately, Sabonis will primarily be known among basketball’s NBA-first fans as a guy who suffered repeated injuries; some, including Team USSR coach Aleksandr Gomelsky, alleged that Sabonis’ later problems were due to a botched knee surgery in Lithuania plus rushed rehabilitation to ready him for play in the 1988 Olympics. Those in the know, of course, remember him as perhaps the best passing seven-footer of his day and certainly among the top five ever to play in the big league. The ‘Tube don’t lie.

And here’s a bonus random buzzer-beater from Sabas’ days in Portland.

• 2004: Euroleague MVP season for Žalgiris Kaunas
In the twilight years of his career, Sabonis returned to a Kaunas whose very lifestyle had utterly changed in the 25 years (really?) since entering the Žalgiris system. Nevertheless, a few things hadn’t changed with history: Arvydas’ crazy court vision, deft touch and what they were just starting to call then “basketball IQ.”

So, at the age of 40, Sabonis took the Euroleague MVP award. And in the three seasons he played with Žalgiris in the ‘00s, the Greens took two LKL championships and a Baltic League title as well.

• 2008-2011: Accolades
The Pro Basketball Hall of Fame induction truly is the capper on Sabonis’ playing career, as it seems he’s taken most other significant individual honors. In 2008, he was named to the list of the “Top 35 Euroleague Players of All-Time” and in 2010 was inducted into the FIBA Hall of Fame.

• One more career retrospective
Leading this YouTube compilation is a quote attributed to Dino Radja: “That guy, without his injuries, would have been better than David Robinson. Believe me, he was that good. In 1985, he was a beast. He ran the floor like Ralph Sampson, could shoot the three, [could] dunk. He would have been an NBA all-star 10 years in a row. It’s true, I tell you.”

It is true. Except Dino forgot about the unstoppable hook shot and the effortless passing.

Though for many, Sabonis’ career will be summarized by a question, i.e. “What if he’d played in the NBA in the early 1990s?” (As Bill Simmons puts it in the first edition of his Book of Basketball whilst lumping Arvydas together with Connie Hawkins in his “Pyramid” scheme, “You can’t play the what-if game with Hawkins without bringing up Sabonis, potentially of *the* great centers if his legs hadn’t betrayed him.”) However, with big Sabas’ entry into the Hall of Fame, today we don’t need to wonder what might have been and instead can appreciate the long career of one of Europe’s all-time greats.

Aug 12, 2011ballineurope
Powered by Sidelines
Share on FacebookShare on Twitter
This post was published on August 12, 2011
Mozgov, Kirilenko star in Russian win over Valanciunas and Lithuania, 91-76 Greatest of all-time: Yugoslavia or Spain?