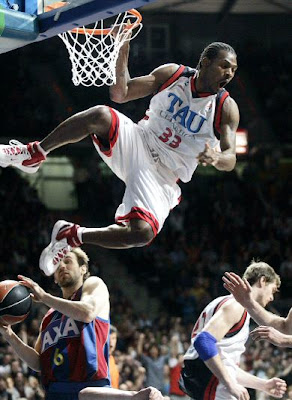 Quite the busy week in basketball land this week, eh? Even if you did follow the slew of happenings over this seven days – the opening weeks of Euroleague and Eurocup Final 16 play, the naming of NBA All-Star teams, FC Barcelona’s streak ending in the ACB, the Greg Oden and Paul Shirley scandals, as well as the usual highlight-reel play from LeBron James and Kobe Bryant – surely some stuff from the bloated blogosphere and cram-packed interweb escaped even the most thorough web surfer’s notice.

A few stories and videos for your week-ending amusement follow.

• The best player blog to follow out there right now is probably Pete Mickael’s. Not only does Mickael manage to regularly post two to four entries per month, his entries are well-written, insightful and thoughtful; Mickael may comment on the state of Euroleague attendance, the Gilbert Arenas flap, living in Europe, or just plain playing ball in the ACB and Euroleague. This week’s post features his take on the Valencia-FC Barcelona game: Barça’s first loss in 26 games.

• Scariest story of the week (aside from Greg Oden and assorted commentary over pictures of his johnson, that is): Former international club scrub Paul Shirley’s open letter column to the people of Haiti. This ignorant diatribe will not be reproduced or linked to here, but the ESPN “Statement Regarding Paul Shirley” does draw chuckles with its terseness; brevity is the soul of wit, eh?

• Fast-forward to July by way of the official teaser clip for the 2010 FIBA U17 World Championship Men:

• Speaking of FIBA, the organization is running an interesting interview over at the official site with Noah Klieger, a sports journalist with over a half-century of writing in two countries under his belt. This week, the octogenarian Klieger delivered the keynote speech at the United Nations on the occasion of the 65th anniversary of the liberation of the Auschwitz concentration camp in World War II.

• Could a lad named Bradley Fisher be the Great Britain national team’s hope in, say, 2015?

• News coverage on the worst sports-industry idea of the 21st century (to this point), a.k.a. the All-American Basketball Alliance, a.k.a. the KKKBA, gets this interview with Don “Moose” Lewis. Prepare for eye rolling and head shaking.

• Slam and Freaknick redesigned and relaunched their Euroleague Adventures website this week and it really looks sharp.

• The Starting Five has what someday may be referred to as “Everything You’ve Always Wanted to Know About Supplements (But Were Afraid to Ask).”

• Finally, BiE has been lax in posting cheerleader videos lately, so here’s a good one from a recent Philadelphia 76ers game:

Jan 31, 2010ballineurope
Powered by Sidelines
Share on FacebookShare on Twitter
This post was published on January 31, 2010
Are you ready for some basketball? Eurosport 2 devotes Tuesday nights to Eurocup Last 16Better watch out: Barcelona destroys Gran Canaria, 105-55