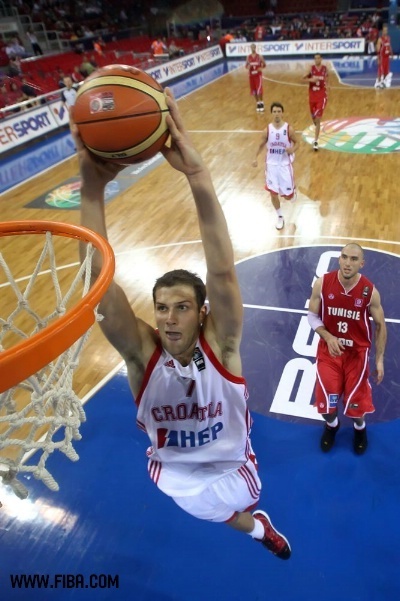 Funny … after the 2011 NBA Draft, was BallinEurope completely alone in guessing the New Jersey Nets got a steal of a pick by landing via trade with the Miami Heat the no. 31 overall selection Bojan Bogdanovic? BiE’d like to think not. After all, contributions to Cibona Zagreb last season in the Adriatic League, the Croatian A-1 League and 10 games of Euroleague play were impressive, even if he seemingly had no one to pass to.

So, how do the prospects look for Bogdanovic after a handful of games with Fenerbahçe Ülker in Euroleague and TBL play? BallinEurope’s man in the U.K., Sam Chadwick, assesses the Croat’s performance thus far … and Nets backers are certain to be disappointed.

In two Euroleague games, Bojan Bogdanovic has really shown why he was deserving of the no. 31st overall status in the 2011 NBA Draft – that’s what I would love to tell you. Unfortunately, this hasn’t been true. So far, the prospective New Jersey/Brooklyn Net has been worse than non-existent for Fenerbahçe: He’s been a negative, in fact attempting eight field goals and hitting zero in those two games. Bogdanovic has hit 50% from the free throw line and is averaging 1.0 points per game with one rebound and one assist in the EL games in addition to three turnovers. His average player rating is a -3 – not exactly NBA Draftee numbers.

Nor is it just the Euroleague where this has been happening: Going all the way back to the London Prepares Series at the beginning of summer, Bogdanovic averaged 10 points per game and four rebounds but only one assist – and it’s not like he wasn’t passing because he was shooting well: In that tournament, Bojan hit an atrocious 14.3% from three and 36.8% from the field, also notching 1.5 turnovers per game.

At Eurobasket 2011, his numbers improved slightly to average 12.3 points and 3.8 rebounds on 47.7% shooting from the field. Yet again, however, his assists were down to 0.8 per game. Croatia finished the tournament in 13th place.

Last up are his Turkish Basketball League stats. Across two games so far, Bogdanovic is averaging a respectable 6.5 points and 2.5 rebounds; the bad news is that he is only dishing out one assist per game while again shooting a miserable 28.6% on two-point field goals and 22.22% on three-pointers.

So what do these above statistics show? They show that Bojan is a shoot-first, think-second type of player, a player who won’t pass up a contested jump shot from 19 feet because he thinks he will make it. Bogdanovic has had good reason to think so, as last season he averaged 18 points per game for Cibona Zagreb on 46.9% two-point field goal percentage and 30.9% from deep. His free-throw percentage isn’t amazing at 75% but remains well above Shaq level. Unfortunately for the Croat, in New Jersey he’ll be teamed with Deron Williams and Brook Lopez, while also having the likes of Anthony Morrow and Travis Outlaw, players that mostly need the ball in their hands to be productive.

I think Bogdanovic is a terrific scorer when he wants to be, but his percentages recently have been bad. We’re not talking “I got a little scratch on my car,” we’re talking “the Titanic sinking” kind of bad … so bad that if anyone looked at his numbers they would never think that he was an NBA Draftee. Bojan really, really needs to step up his game, otherwise the Nets will just leave him in Europe for the rest of his career and he will be forgotten. If he does step up his game, however, I see him as someone the Nets can use to spread the floor, knock down threes and pretty much provide scoring off the bench … only time will tell.