Brno vs. Wisla in Euroleague Women: Whose story continues? 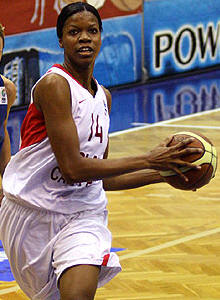 In the final remaining game of the Euroleague Women quarterfinal playoffs going down tonight between Frisco Sika Brno and Wisla Can-Pack, it’s not a question of whether an improbable run will continue but rather *which* improbable run.

Brno has faced elimination on three occasions in this tournament already, the most recent coming in game two of this round last Wednesday when the Czech side defended homecourt and, oh, what the hell, here’s the entire FIBA Europe writeup:

Brno dominated the third and fourth quarters, leading by as many as 24 with five minutes left in the game.

Eva Viteckova led the way for the Czechs with 25 points on five of eight shooting from behind the three-point line. Taj McWilliams added 20 points and nine rebounds.

Meanwhile Iziana Castro Marquez led the way for Wisla with 19.

The Polish were outrebounded 41-26 in the loss.

This convincing Brno win chased a nail-biting four-point loss in Poland in which the Friscans had led by as many as 10 points late in the third quarter. (Heck, if FIBA employed aggregrate scoring for this round, Brno would be through…) No matter: Margin of victory is second to the big W; these ladies are still around despite an 8-6 record.

Wisla Can-Pack, meanwhile, has been the talk of Euroleague Women 2009-10 since week one and the team’s last-minute inclusion in the competition. All they did thereafter was go 8-0, extended that mark to 10-2, and made relatively easy work of MiZo Pécs in their two meetings in Krakow. Unfortunately for Wisla, at tipoff that overall 13-4 means exactly as much as Brno’s 8-6, i.e. nothing.

And Brno has given the Krakovians more game than any other team to face Wisla in this competition: The Czechs are the sole team with a positive point-differential against the Poles at plus-11; the pointspread for this game is the slimmest Wisla has seen all season, at just minus-2.5.

As the FIBA writeup implies, Wisla will need to win the battle of the boards against an apparently hungrier Brno team. Much onus should thus be placed on Janell Burse, who’s either been having some consistency problems or is slowly being mastered by the remainder of the Euroleague women. The stats show that Burse has managed a double-digit rebound total in just three of the last seven games, after nabbing at least 10 in seven of the first eight games of the EL season.

While the field narrows, it seems Brno is just finding its stride. Whereas early press portrayed this team as mostly a one-woman (namely Dewanna Bonner) show, the Czech side has found a way to spread possession around. After 14 Euroleague Women games, the Brno roster now holds three players other than Bonner averaging double figures:  Viteckova, McWilliams (who has been hot-and-cold in shooting but has nevertheless been on the floor *every minute* since the team entered the Top 16 round), and the marvelous Hana Horakova, who’s got 4.8 boards, 2.9 assists and 2.5 steals per game to go with her 12.2 points.

The home court and paper-side talent may be all on Wisla Can-Pack’s side, but so is the pressure tonight. And after this game over, somebody’s story will continue. Certainly in interesting fashion, too.

Mar 3, 2010ballineurope
Powered by Sidelines
Share on FacebookShare on TwitterShare on Google+
On Kahn, Rubio, Milicic, Simmons and the illusion of regretFantasy tips from the Euroleague Boss: Top 16, week five