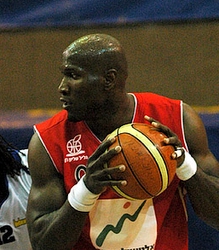 Uche, big as ever

Entente Orleanaise will probably not be returning to the Euroleague for 2010-11 season as the 45ers were bounced from the LNB tournament by EuroChallenge final four team Chorale de Roanne last night, 78-71.

Buoyed by the home support at Vacheresse Hall, Roanne quickly took the lead and expanded the advantage to as much as 16 points in the first quarter behind Pape-Philippe Amagou of Team Cote d’Ivoire. Orleans managed to find itself on defense in the second quarter, totally shutting down the 45ers to a bleak nine points in 10 minutes; at halftime, Roanne led, 39-36.

Orleanaise was never able to close the gap, however, with Dylan Page turning in a huge second half, ultimately racking up a nice stat line of 25 points, eight rebounds and five assists, as Roanne led through to the buzzer.

Amagou ended with 17 points and four blocks for Roanne, and Team Nigeria’s Uche Nsonwu-Amadi had a big 20 points and 12 rebounds. All in all, the Chorus’ big ménage accounted for 62 of the team’s 78 points. High scorers for Entente Orleanaise were Aldo Curti with 15 points and Laurent Sciarra, who put in 11 to go with five rebounds and four assists.

Roanne takes on Le Mans in game one of the LNB semifinal series on Friday at 8.30pm CET.

May 26, 2010ballineurope
Powered by Sidelines
Share on FacebookShare on Twitter
This post was published on May 26, 2010
WWDD? (What would Dirk do?) Four destinations for free agent NowitzkiFIBA’s Baumann frets about British basketball post-2012; Spice reassures