Congratulations go out from BallinEurope to the 2011-12 VTB United League champions – to the surprise of few, CSKA Moscow.

The Red Army’s 74-62 victory over Unics Kazan in a rematch of last year’s final represents not only its second VTB championship in three seasons of the league’s existence, but the first title in a potentially history-making triple crown. CSKA are big favorites to take the Euroleague title (one sportsbook with typical lines had Moscow at 3/4 odds and second-best FC Barcelona at 13/5) and are *serious* favorites (would you believe odds of 1/28?) in the PBL finals against BC Khimki after going 17-1 in the 2011-12 regular season.

(A note to the hopeful: That one CSKA loss in PBL play this season? Yep, handed to them by Khimki back in December.)

In previous VTB championship-winning seasons, CSKA has managed to herd up an impressive lot of trophies: In 2008-09, the Russian league champs were nipped by Panathinaikos in the Euroleague finals and finished a disappointing third in the Russian Cup tournament after taking the VTB United League Promo Cup. In 2009-10, CSKA enjoyed three titles – a triple crown of sorts – in winning the Russian league and cups along with the VTB title; the Red Army finished third in the EL that year.

Also adding to his CV over the course of the VTB final four tournament was Andrei Kirilenko, who was named tourney MVP.

(VTB United League) – The Final Four in Vilnius and the third championship in the history of the league ended in a CSKA triumph. In the final match, the Red Army came out on top against Unics Kazan, 74-62.

In the final match CSKA started with a jerk, going up 11-1 thanks to three distance shots of three. Unics reduced the backlog to five but didn’t manage to do more. However, Unics coach Evgeny Pashutin managed to wake up his players: Kelly MacCarty and Nathan Jawai fought for rebounds, and Lynn Greer made use of Andrey Vorontsevich’s mistake to score with a foul so that the difference was reduced to what would be its minimum: 34-33.

In general, this was just a beginning. Javan and his partners prevented attempts by CSKA to pull ahead and this final remained a duel with the army club which recalled the Lietuvos Rytas game of Wednesday: Kazlauskas’ players were always ahead, but the opponent was always there.

However, early in the final quarter, the Euroleague Final Four participant finally made a spurt – a 9-1 run which culminated in a brilliant distant hit by Ramunas Siskauskas to beat the 24-second clock, making the score 62-52 with six minutes to play.

After this the tribunes of Siemens Arena began to chant loudly the nickname of their former idol: “Siska! Siska!”

As a result, CSKA became the champion of the league for the second time in three years of the history of the competition!

The final score: 74-62. The most productive for CSKA were Darjus Lavrinovic with 15 points and Siskauskas with 12. For Unics, Greer scored 14 and Nathan Jawai got 13. 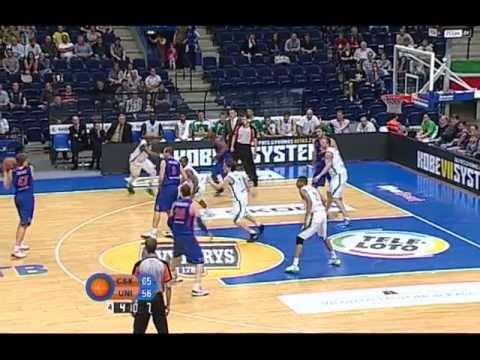 “We plan to win three titles,” said Kazlauskas, “we don’t hide it. The other thing is if we will be lucky enough to do it but we will try hard. We have reason to celebrate now. Unics is a talented team, one of the eight best in Europe. Besides, the game was at high stakes, therefore it turned into a battle. Obviously, if we had played at 100% tonight, the final would not be a final. We will get back to work tomorrow, because we have another Final Four at the end of the next week.”

Unics coach Evgeny Pashutin said that, “We played against CSKA at the maximum, kept the opponent in suspense the entire game. In the end the match, we let CSKA have three or four rebounds and they turned into eight points. … all the guys deserve a word of thanks, and also Domercant for being recognized as the best shooting guard in the tournament.”

May 4, 2012ballineurope
Powered by Sidelines
Share on FacebookShare on Twitter
This post was published on May 4, 2012
Jack Dawson loves Rose (Derrick Rose, that is) in “mashup Titanic hilarant”Early nominee, Eurocentric buzzer-beater of the year: Juan Carlos Navarro hits half-courter before halftime