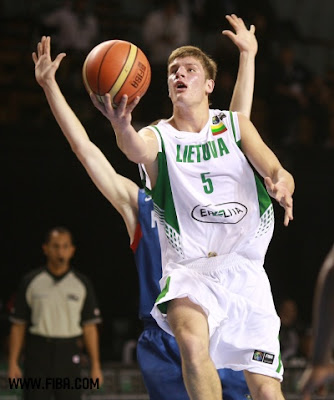 A number of players from Team Lithuania’s 2010 European Championship U18 squad have been moving on the market lately, but few have caused disquiet among Žalgiris fans as Lietuvos Rytas’ recent acquisition of SG Dovydas Redikas out of Marciulionis Academy.

Tournament MVP Jonas Valanciunas is already officially with Lietuvos Rytas, and his all-tournament teammate Deividas Pukis is heading to the ‘States to follow the path of Linas Kleiza. PG Vytenis Cizauskas has gotten with Kaunas, and yesterday Edgaras Ulanovas joined the Greens as well. But it was Redikas’ move which captured the imagination and created some indignation among Žalgiris fans.

While Ulanovas heading to Žalgiris wasn’t that big of a deal, Redikas move to join Kaunas’ arch-enemy Lietuvos Rytas was met with few drops of soreness by fans in Kaunas. Rather than sign with Žalgiris, as was expected – Redikas had worn the green and white in the 2009-10 Euroleague youth team tournament – Redikas decided to stay in Vilnius, the city in which he played at Marciulionis Academy. He will be loaned to Perlas Vilnius, Lietuvos Rytas’ farm team for a first season.

Allow BallinEurope can to douse the fires of green rage a bit here, if BiE could. A source close to the matter informed us last night of the reason for passing on Redikas – and it has little to do with the youth’s incipient talent: “It’s simple. His camp asked for a €80,000 buyout,” a sum which seemed way too high for Žalgiris to pay for an 18-year-old.

The same source reported that the Marciulionis Academy and/or his handlers were quite inflexible in their negotiations with Kaunas, thereby begging the question, “How much did Rytas pay?”

The official press release on the signing stated that “Redikas was still under contract with Marciulionis Academy, but buyout matters were worked out by Rytas general manager Jonas Vainauskas.”

Redikas has played for Team Lithuania in the 2008 U16 European Championship, the 2010 U18 European Championship, and the 2009 FIBA U19 World Championship for Men. In these three tournaments over three years, Redikas showed a relatively consistent line of 9.9-12.0 points to go with 2.9-4.9 rebounds per game; his highs were all recorded on the world tournament, where he also added 1.9 assists per game in eight games.

At the 2010 Nike International Junior Tournament, Redikas started at two guard for Žalgiris and turned in his best effort in his team’s final game in Paris with a sweet line of 23 points on 9-of-15 overall shooting to go with four rebounds, four assists and three steals against eventual champion INSEP.