In tribute to that great international pastime known as “NBA mock drafting,” BallinEurope’s man in the U.K., Sam Chadwick, periodically takes a look at some of Europe’s prospective high draft picks. Today’s profile features the Czech Republic’s Jan Vesely, a power forward reckoned to be the second European taken in the NBA draft (after Donatas Motiejunas) and a bona fide first-rounder. 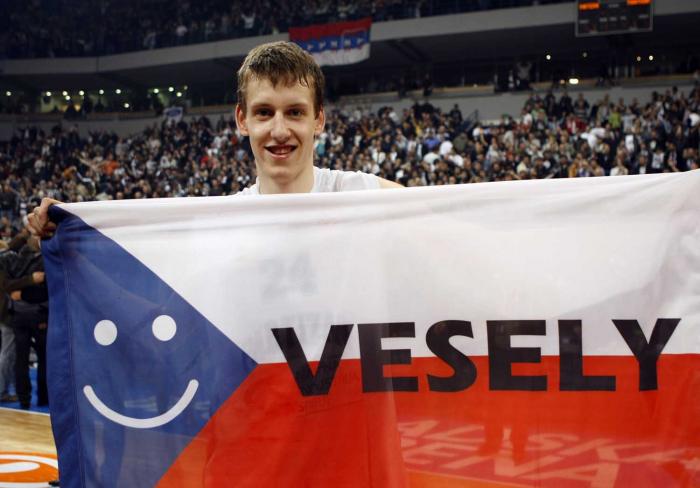 Strengths: Vesely is ranked as the second-best international prospect in this year’s draft after Donatas Motiejunas; he is a scoring, hustling small forward/power forward from Partizan Belgrade, another stereotypical European player who has a sweet shooting touch but has a fairly weak inside game as he can be pushed around by bigger opposition which is likely in the NBA. This will surely change with time and the right training during the off-season, though.

Weaknesses: The Czech is relatively lightweight compared to the bigs in Europe and the NBA and would easily be pushed around on any attempted posting up; some weight training and general weight gain over the rest of this season and in the offseason would improve this situation. Some scouts also say that he makes careless mental mistakes.

Mock draft forecasts: Vesely is currently ranked as going anywhere from between 11th to 20th; however, some have him simply skipping this year’s draft and entering the NBA next season. NBADraft.net has Vesely going to the San Antonio Spurs with the 19th pick [Sheesh, imagine Tim Duncan, Tiago Splitter *and* Vesely on the same roster: The Triple Towers! –Ed.] or to the Portland Trailblazers with the 20th pick, while Draft Express has him landing with the likes of the Milwaukee Bucks or Chicago Bulls at no. 11 overall.

Vesely would be a particularly good fit with the Spurs and Bucks; in fact, due to his current contact keeping him with Partizan through 2013, his situation may fit San Antonio better, as they allow him to further develop in Europe for the next few years and calling him when a new small forward is needed. Should the Spurs require a strong healthy body for 2010-11, they could try and make an agreement with Belgrade management.

With Milwaukee, Vesely could come in and contribute straight away; much like Ersan Ilyasova, Vesely would provide another scoring presence on both the perimeter and as a driving small forward who can get into the key. Milwaukee is a solid passing team and Jan could certainly be a positive contributor for them. Defensively, he should be seen as an improvement over the likes of Carlos Delfino, Jerry Stackhouse and Luc Mbah a Moute.

My analysis: Of the Spurs and Bucks, I’d rather see Vesely playing in San Antonio, given his option between immediate contribution and another season or two in Serbia. On the Spurs, Vesely would be part of a good young squad sporting the likes of DeJuan Blair and George Hill [And Splitter! Don’t forget Splitter! –Ed.], while also learning from the Richard Jefferson/Tim Duncan/Tony Parker leadership.

Other choices: With a selection at about no. 25, the Boston Celtics could draft Vesely to either back up Paul Pierce (which Vesely could well do) or they can call him over in two to three years, when the majority of their big three have aged further and can no longer contribute to a championship contender.

The Portland Trailblazers could pick up another European star, though not at Rudy Fernandez level, and add another building block to a young franchise who can always come in at a later date and contribute. If the Blazers’ injury problems continue into next year then a versatile reasonably injury-free 6’11” power forward can always help. As well as picking up Vesely, I would also recommend the Blazers finally bring aboard Joel Freeland from Unicaja Malaga as he can also help in their current situation.

The Bulls, meanwhile, are looking into developing the likes of James Johnson as well as continuing with Luol Deng at the small forward position; at the power forward they are firmly set with rookie Taj Gibson, while also having the ability to re-sign Brad Miller, Chris Richard and/or Hakim Warrick.

In the end, whoever gets Jan Vesely is getting an important piece – not a cornerstone, but a building block who, if put with the correct team, can be a great fit and help any team needing him.

Also recommended for those interested in Vesely is the nice statistical analysis done on the Partizan player over at European Prospects and In the Game.