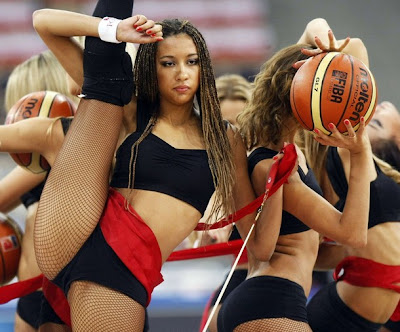 The FIBA EuroChallenge may be considered a bit of a lower-tier club tournament here on The Continent, but the 2009-10 edition of the contest is certainly among the tops in terms of competitive balance.

With the final games of the Last 16 phase all tipping off tomorrow night, eight teams remain in the hunt for four quarterfinals spots and just four teams (Banvit, Belgacom Liege, EiffelTowers Den Bosch, and Proteas) have been eliminated. BC Göttingen, Chorale Roanne Basket, Krasnye Krylia, and Scavolini Pesaro are through already; who will join them tomorrow night?

Following is BallinEurope’s super-compressed briefing on the mathematical possibilities for each still-striving contender plus a few storylines at play in the games.

• Apoel. If Apeol wins against KK Buducnost, they’re in; at 5-1 in Nicosia this EuroChallenge season with the sole loss to (relatively) mighty Pesaro, things look decent for the Cypriot squad. But hey, Cyprus’ defending champions have blown away disappointing memories of the 2008-2009 EuroChallenge in which Apoel went two-and-out while scoring less than 57 points in the matches.

• Antwerp Giants are involved in a three-way dogfight with Chorale Roanne and Enisey Krasnoyarsk; win and they’re in, of course, but with a loss in Roanne the Giants could still back in with a Krasnoyarsk loss to Banvit. Guard Bryan Hopkins last week became the latest Antwerp injury, leaving the Belgian squad without guard Bryan Hopkins, forward Randy Oveneke, center Christophe Beghin, and former Atlanta Hawks swingman Thomas Gardner for much of the season’s remainder.

• Artland Dragons. The Dragons must travel to Zagreb for their final match, but all the German team needs is a loss by FMP Belgrade to make their result irrelevant and get to advance. Artland is riding an overall five-game winning streak going into this match, pulling themselves out of a doom-laden start to steady themselves in ninth-place on the Bundesliga table and onto the playoff bubble.

• BC FMP Belgrade makes for a nice illustration of the nature of tournament basketball. After terrifying the competition in the early going in running off a 9-1 start (including a 109-point barrage against VEF Riga), Belgrade has dropped two in a row and are suddenly teetering on the edge of EuroChallenge elimination. All FMP must do is win tonight at home against Liege; can you say “disproportionate pressure?”

• Elan Chalon. Chalon is under the gun tomorrow night, needing both a win against Scavolini Pesaro and a Buducnost win in Nicosia. Reckon the biggest question might be whether Chalon can recover from the 97-64 pasting Le Mans gave them on Saturday; currently mired in 14th place in the LNB, Chalon might find its return to FIBA tournament play (the team was last seen playing in the Korac Cup in 2002) short-lived, indeed.

• Enisey Krasnoyarsk. Russia’s representative managed to save its EuroChallenge season (and halt skids of 0-3 and 1-4) with a solid win at home against Antwerp last week. This week, Krasnoyarsk must get the “W” and pray that a no. 1 seed is enough enticement for Chorale Roanne to win against the Giants. Currently in the eight spot in Russia, Krasnoyarsk seems likely to get an invite to this tournament again next season after this successful inaugural run in 2009-10.

• KK Zagreb. Though the kosar klub is still playing to get in, Zagreb is in a decent spot, playing Artland in Croatia in a winner-takes-Group J game; even an FMP Belgrade loss advances the Croatian side. Zagreb is putting in a stronger performance than the club’s bid of 2008-2009 but at less than 77 points scored per EuroChallenge game this season, the team will need to find some clampdown D against the sharpshooting Giants tomorrow night.

Mar 8, 2010ballineurope
Powered by Sidelines
Share on FacebookShare on TwitterShare on Google+
Barcelona in with win at Valladolid (Si, there will be highlights)Ten spots filled for Jordan Brand Classic; two each to Turkey, France, Serbia