Eurobasket 2009 championship: Serbia can win if… That’s the lead quote over at the Eurobasket 2009 official site, and it’s good enough to lead here at BallinEurope.com as well on the morning of the final game. Firstly, congratulations to Spain and Serbia for getting into the final game after a seriously hard-fought tournament.

And now the big question: Can Serbia beat the prospective champs? The gut reaction is, of course, “no way, man. The youngest team in all of Eurobasket overcoming a team of world-class all-star level household names? Dream on.” On the other hand, as supporters of Team Greece and Team Spain itself already know from as “far” back as Euroleague 2007 that, well, upsets do happen in this tournament.

So how can the upstarts overcome the Spaniards? Glad i asked. Serbia can win tonight if…

• …Spain forgets history. Since the Iberian nation rose to the forefront of basketball superpowers in the late 90s, the team has managed to rack up three golds and a bronze in this tournament (to sit in the trophy case with Eurobasket medals from 1973, 1983 and 1991). The championship-game loss was particularly egregious in 2007, as essentially the same team as this tournament’s went up against Team Russia as a double-digit favorite only to be exposed as slackers on the boards. The most memorable thing about that finals game was the stunning lack of initiative and stamina on the part of Spain, a bugaboo that could come back to haunt them today.

• …youth wins out. Sheer energy and dynamism – combined perhaps with a universally-acknowledged underdog’s attitude – propelled Andrei Kirilenko’s boys past Spain two years ago, and Serbia brings more of the same today. As has been well-publicized, the oldest player on this roster is Bojan Popovic, all of 26 years old. If nothing else, a higher energy level from Serbia will erase any advantage Spain might have held with Serbia having played a tight late contest last night, while Spain received the benefit of an early-hour blowout.

• …Serbia brings a surprise. Last night, Milos Teodosic was the shocking stud for Serbia, with perhaps the best single-game performance in this tournament thus far. (“”Milos Teodosic is one of the best point guards in Europe,” proclaimed teammate Novica Velickovic in the post-game. Really? At 22? He certainly was last night…) Against swarming Russia in the quarterfinals, Uros Tripkovic led all scorers while second-string center Kosta Perovic came off the bench for another 13. In knocking out Lithuania, Serbia brought a barrage of threes while multi-purpose Nemanja Bjelica crushed underneath. While Spain brings the megastars, Serbia brings a team; if the latter manages to bring the unexpected player to the forefront – recall a key clutch player in the game one win for Serbia was 19-year-old Milan Macvan – it will be a long night for Spain. 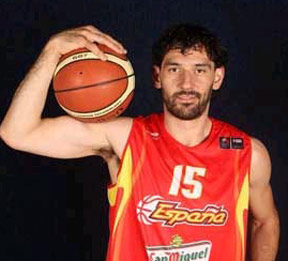 • …Serbia can exploit matchups against Jorge Garbajosa. If any one player on Spain has not lived up to the hype recently, it’s Garbajosa. Perhaps the surgeries of 2007 are catching up with the 31-year-old or maybe he just hasn’t found his niche on this particular national team, but when on the floor, Garbajosa has been the Achilles’ heel of this team. His shot selection has been timid – except from the three-point line, where he’s just 5-for-19 in this tournament – and he’s been a non-factor in the passing game, with *all* outlet passes seemingly coming from Juan Carlos Navarro and Ricky Rubio (you’ve heard of the triangle offense; call this one “the square”). Sure enough, in the previous Serbia-Spain game, Garbajosa’s anemic shooting performance kept Real Madrid’s new acquisition on the bench for most of the second half. Another show like that could account for the margin of victory.

• …the game comes down to a battle of game plans. Dusan Ivkovic or Sergio Scariolo: Which would you choose to coach your team? That’s what i thought.

• …Serbia channels 2007 Russia – like they did in the opening game. Eurobasket 2009 comes full circle with the matchup in the finals, repeating the most memorable game of day one. Serbia shocked all observers with the solid win over the prohibitive favorites; this team out, they won’t nearly be as big a surprise for Spain, but no matter. Spain was shut down through a combination of tough defense, tougher rebounding, and winning the individual battles at guard. With the exception of Pau Gasol, you’ve gotta like any Serbian player over his Spanish counterpart in terms of sheer defensive skill. And this youthful bunch has shown it has the will to play with the best.

BiE fearless predictions: Nah, i’m not willing to take a barrage of criticism here, nor am i willing to wedge with the serious underdogs in this one; let’s just say it’s going to be waaaaaaaaay closer than people think. In the qualifying matches, let’s go Slovenia over Greece, France over Croatia, and Turkey over Russia.

Sep 20, 2009ballineurope
Powered by Sidelines
Share on FacebookShare on TwitterShare on Google+
Who's ready for EuroBasket 2011?From BiE to Team Spain: ¡Felicidades!