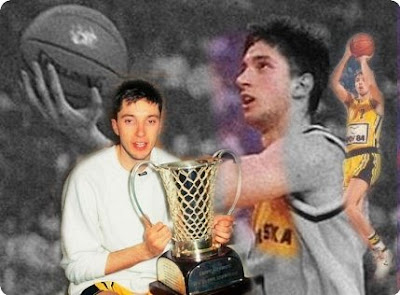 Toni Kukoc: All over the Euroleague record books

Attention, all statistics addicts! With the time to tipoff running down steadily, BallinEurope this morning puts things into a little numerical perspective. Which players, coaches and teams will forever be immortalized in the record books when all is said and done at the 2010 Euroleague Final Four? Some measuring sticks for would-be heroes are listed below. Let the countdown begin!

12: Number of free throws made – in 13 attempts – by Manu Ginobili for Kinder Bologna in a losing effort back in 2002. The trips to line helped produce 27 points for Ginobili, which tied the modern-era mark for scoring in a Euroleague final, matching … Manu Ginobili of 2001. Antoine Rigaudeau also scored 27 for Zalgiris (ironically against Bologna) in 1999 while going 5-of-7 on threes; Zoran Savic in 1991 and Dejan Bodiroga in 2001 also accomplished the feat.

11: Number of blocks registered by then-named Pop 84 Split, including four by Kukoc and three from Avy Lester, in a 70-65 finals win over Barcelona in 1991. The victory completed back-to-back-to-back Euroleague titles for Split, a feat never matched.before or after. In fact, the sole back-to-back Euroleague champion since ’91 was Maccabi Tel Aviv, with consecutive rings won in 2004 and 2005.

10: Kukoc’s spot on the table for career scoring in Euroleague Final Four competition. Sitting at no. 11 is CSKA Moscow’s Trajan Langdon, who needs just one basket to surpass the Spider From Split. J.R. Holden is number two on the list, but is 56 points behind all-time leader Nikos Gallis’ 231 cumulative.

9: The mark for most three-pointers ever registered over a Final Four competition is nine, set by Panagiotis Giannakis with Aris and Doron Jamchy of Maccabi, both in 1989. And how wacky was the three-point bombing in ’89? Kukoc went 8-for-11 in the tournament for KK Split that year as well. Terrell McIntyre scored the most threes since the 1998 tourney in going 8-of-20 for Montepaschi Siena in 2008, while Sarunas Jasikevicius was 7-of-11 in Panathinaikos’ winning bid last year.

8: The number of previous Euroleague Final Four appearances by both Theo Papaloukas (who made six tournaments with CSKA and Olympiacos) and Holden. Incidentally, Matjaz Smodis has seven EL Final Four appearances under his belt, Viktor Khryapa’s been here five times before, while Ramunas Siskauskas and Zoran Planinic have four bids each as well. Nothing like a little playoff experience for Moscow, eh?

7: Euroleague titles won by Dino Meneghin, a record that seems almost unbreakable – even by all those CSKA Moscow stalwarts. In what is generally considered the EL modern era, i.e. since 1988, Fragiskos Alvertis of Panathinaikos earned five rings and retired after winning his last one in 2009. Jasikevicus might have an outside shot at the mark before he retires, with his four titles (with three different clubs!).

6: Record-setting number of three-pointers put in by McIntyre for Montepaschi Siena against Maccabi Tel Aviv in 2008.

5: Number of Euroleague titles taken by CSKA Moscow; the first came in 1961.

4: Number of appearances made by Gianluca Basile’s teams, including three with FC Barcelona; the buzz around the press room this year is all about wondering whether 2010 is Basile’s last such run. Incidentally, Basile has never won a Euroleague ring.

3: Number of Final Four MVP awards given to Kukoc. Kukoc bagged all three prizes between 1990 and 1993; no wonder this guy was so hyped before joining the Chicago Bulls. The only other player with multiple MVPs in the modern era is Dejan Bodiroga, who took it back-to-back in 2002 and 2003 with Panathinaikos and FC Barcelona, respectively.

2: Number of times Partizan’s Dusko Vujosevic and Olympiacos’ Panagiotis Giannakis have previously faced off as head coaches; they’ll be holding the tiebreaker tonight. Both meetings came this season in Euroleague regular season play and the home team won on both occasions: Partizan held off Olympiacos at Pionir in week five, 86-80, while the Reds sunk the Black-and-Whites in week 10 in an 81-60 blowout. 1: Number of times Olympiacos, Partizan Belgrade and FC Barcelona have each won the Euroleague title; the last of these was Barça’s back in 2003. To put things into perspective: Since that time, CSKA has taken the big enchilada twice and has appeared in every single Euroleague Final Four.

0: The number of Euroleague championships won by all four head coaches, combined. Talk about your history in the making…

A few other interesting historical statistics include: Darryl Dawkins grabbing an insane 19 rebounds for Philips Milano in the 1992 Final Four … Kukoc holds the record for assists in a game, with 10 dishes to Benetton Basket teammates in 1993; he also recorded nine in a game for Jugoplastika (predecessor to today’s KK Split) in 1990 … Holden is the all-time leader in three-point shooting, having gone 25-for-74 in his career; among active players, Langdon has 17 dingers and Smodis has 15 … Galis is the all-time leader in free throws with 56, a record that seems doomed with Smodis, Siskauskas and Theo Papaloukas at 46, 42 and 41, respectively, going into tonight’s games … perhaps the best shooting performance in a final game was Siskauskas’ 9-of-10 in a losing effort against Panathinaikos in 2007.

May 7, 2010ballineurope
Powered by Sidelines
Share on FacebookShare on Twitter
This post was published on May 7, 2010
Impressions gleaned from Nike International Junior Tournament, day one“This is the Final Four”: The Euroleague quotebook going into the semifinals