British Basketball: What they're saying on the eve of The FIBA Decision

If it hadn’t been for all the personality-cult stuff surrounding a certain King James, the fateful FIBA committee vote scheduled for Sunday would more rightly be known as “The Decision”: In Lyons this weekend, the final determination will be made as to whether Team Britain receives for the 2012 London Games the traditionally-granted automatic qualification given the host nation’s hoops team.

On the eve of British basketball facing what even FIBA Secretary-General Patrick Baumann has called “the biggest decision in its history,” pundits, players and the powerful are all weighing in on the impact of “The FIBA Decision.” BallinEurope rounds up a few stories and such from the interwebs for your perusal.

(As for BiE, of course we’re backing the British bid. How can you not give it them?)

• First and foremost is Pops Mensah-Bonsu. BiE dares say that no one represents the pride and hopes of this team better than Pops, and the man’s passion for winning with Team Britain is matched by few.

This writer recalls meeting Mensah-Bonsu on an open media day during last year’s Euroleague Final Four. While most (read: basically all but Pops) players adopted the standard byline “We take these games one at a time; I’m not thinking about tomorrow,” Pops enthusiastically stated he intended to win the EL tournament with CSKA Moscow and then “get back to Britain and win a few games with them.” (Well, one out of two ain’t bad.)

In a statement published by big London ‘paper The Guardian, Pops emphatically labels the exclusion of Great Britain from the Olympic tournament as “a sin.”

Writes Pops, in part: “…I would be extremely angry indeed and feel badly let down by the sport if the vote went against us in Lyons.

“As luck would have it I’m not only playing in France at the moment with Asvel Villeurbanne but I’m actually based in Lyons and have got the day off. 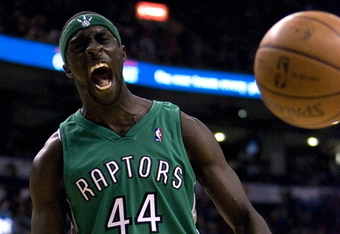 “So I’m heading straight down to the FIBA hotel on Sunday morning to join up with the British delegation and argue our case until I’m hoarse. And it’s an easy case to argue. We have gone from being nonentities in 2005 to being a team which other big sides now worry about…”

Nor does Mensah-Bonsu show any apparent trepidation about his team’s first Eurobasket group, which he himself labels “The Pool of Death”: “Spain, Lithuania and Turkey would all rank top five or six in the world, and Poland are dangerous as well.

“But I tell you this. None of them were exactly over the moon when GB came out of the hat with them. They know we are well capable of taking a few scalps.”

• Team Britain captain/Mersey Tigers forward Drew Sullivan echoes teammate Pops in stating in MVP magazine online that “It would be pretty devastating if we don’t get it.” He also speaks for the frustrations of many when he says that “I feel, from what I understand, that every summer FIBA has added another target. We’ve met that. Then they’ve added something else again. So it would be extremely frustrating.

“Personally, I’d be very disappointed if we weren’t to get an automatic bid. But we’ve met every challenge they’ve put in front of us. If, for some bizarre reason we don’t get it, we’ll go out and try and meet that challenge as well.”

• Mark Woods wrote the piece in which Sullivan goes off as aforementioned and Woods has been *the* primary source on The FIBA Decision as of late.

In the Herald Scotland runs a Woods piece bringing us the sad news that, while FIBA threatens to stick to its guns on the requirement to merge British programs, in fact “The three home nations have opted against forming a single British governing body for basketball, despite pressure to unite as part of a deal to secure a place for Great Britain teams at next year’s Olympics.”

While the three associations have “agreed to closer co-operation, … their unwillingness to merge will leave board members of FIBA, the international governing body, with a dilemma when they convene in Lyon on Sunday.”

• Finally, Woods makes his own opinion clear in MVP Magazine: Britain must get a shot in the Olympic Games. Woods makes a salient argument here, reminding us of the 1992-born success story that is today’s Spanish basketball. An excerpt:

“…at the Los Angeles Games, silver was taken back to Iberia by a side which contained the country’s first NBA player – the late tragic Fernando Martin.

“Still, there were few hints that – barely a generation later – a collective of world-class stars, who had been inspired by the Dream Team and their own homegrown memories, would go on to challenge the USA for world supremacy.

“Would it have happened if Catalunya had not won the right to light the Olympic flame? Perhaps. Even with Spain finishing a lowly ninth, did the exposure which baloncesto Jgained at the Games, help to catalyse the growth in the ACB and the seemingly incessant talent production line?

“That cycle of success could be repeated in Great Britain, a generation onward. And that tantalising possibility is why FIBA must say yes when its 22-strong brains trust sits down in Lyon on Sunday and ponders whether to award the hosts an automatic place at the London Games.

“To do so would be to open the door, to hand British basketball a sporting chance of breaking its own cycle of mediocrity.

“To shut the door in its face would be a brutal condemnation and a sign that self-interest and short-termism have prevailed.”

• Meanwhile, an interesting wrinkle has been the reticence of the British Olympic Association (BOA) to back automatic entry to its own team. Under current International Olympic Committee rules, any Olympic country must grant “host nation participation status” upon a team to actually participate in that sport. Until *last week*, the BOA had not approved this status for basketball, but had for volleyball, weightlifting and handball (handball!).

• Of course, with new policy in place, the BOA is 10,000% behind the British basketball bid. Said BOA chief Andy Hunt upon announcing the backing: “Basketball in Great Britain has made excellent progress since the introduction of the British Federation in 2006, with both the men’s and women’s teams qualifying as group winners for [Eurobasket 2011].

“They have surpassed expectations and there is no question that they are now capable of producing credible performances at the London 2012 Olympic Games.”

• Finally, if the Great Britain women’s side doesn’t get to play in the Olympics, neither will Bermuda Female Athlete of the Year for 2010/University of Tennessee standout Jenaya Wade-Fray…

Mar 12, 2011ballineurope
Powered by Sidelines
Share on FacebookShare on TwitterShare on Google+
On streetballing and moving the goalposts: An open letter from Patrick BaumannJuan Dixon comeback begins today with Banvit