Though Team FYR Macedonia eliminated hosts Lithuania from the 2011 EuroBasket tournament in mid-September, a certain amount of talk-trashing about the match continues in the blogosphere.

Yesterday, FIBA was forced to do a bizarre bit of damage control after Lithuanian media – specifically, who else but powerhouse club sponsor Lietuvos Rytas? – reported that two players competing in EuroBasket had tested positive for performance-enhancing drugs; the piece quoted representatives from the Lithuanian Anti-Doping Agency stated abnormalities had been found and that further testing would have to be done by FIBA on the samples of the two players.

FIBA Europe was quick to deny any such claims, however, soon releasing the following tersely-worded statement on the subject:

“FIBA Europe has dismissed media speculations which claim that two of the players participating in the recent EuroBasket in Lithuania returned a positive drug test.

“FIBA Europe has emphasized that any such news reports are without substance.

“FIBA Europe would have been the first to be informed about positive tests for banned substances during EuroBasket 2011, a tournament that has already been trademarked as one of the best and cleanest basketball events ever.

“On Tuesday, news reports sourcing in Lithuania and reproduced around Europe, were referring to two players who have been tested positive for banned performance enhancing substances during the EuroBasket.”

The lifespan of this rumor through the 21st-century hype cycle – from half-baked rumor to re-reportage online as fact to official denial to tapering off of tweets – with the speed of a fruitfly, and in the squall of commentary at least one Macedonian media outlet took quite the aggressive stance toward their Lithuanian counterparts.

The MINA piece, together with snarky comments provided by BallinEurope, follows.

“Lithuanian media, the same media who predicted their nation reaching the final, even printed tickets for the Spain match before their team even played Macedonia, is now claiming there were two basketball players using Steroids during the European championship in Basketball.” 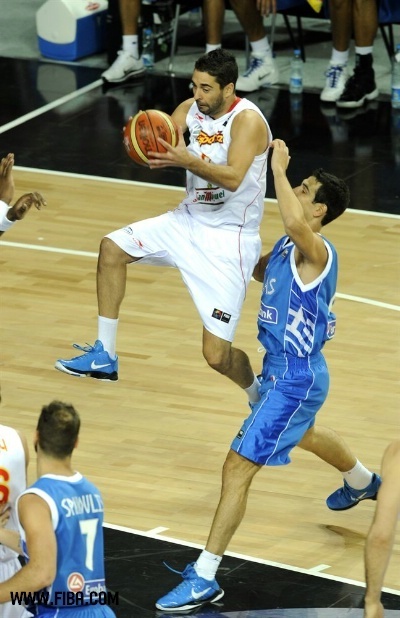 “Some people it seems, just can’t take a loss…”

“The Lithuanian basketball federation had said nothing, but the media today claimed ‘for sure’ there were two basketball players using steroids. First it was two Macedonians, then [they] corrected themselves and now [it’s] one Macedonian and one Spaniard. Though frankly, Macedonians did request a doping test for Navarro (who couldn’t miss) as well as for the Greek referee who had 92% of his calls go against Macedonia.”

(BiE thinks that last part is meant to be ironic; either that or some people just can’t take a win.)

“FIBA issued a quick press release slamming the Lithuanian media for their speculative reporting because the international body had conducted numerous tests and all came back negative. FIBA went even as far as to say that was the ‘cleanest’ tournament ever.”

(Read the FIBA Europe statement, “…any such news reports are without substance.” Wait a minute … is that a play on words?)

“FIBA on its website refused to speculate which national teams or players the Lithuanian media referred to!”

(Perhaps because they’ve put the matter of Navarro and Bo McCalebb’s seemingly supernatural powers in the tournament into an X-file … incidentally, who ends a news story with an exclamation point?)

BiE believes the best solution in order to prevent a war of words between Macedonian and Lithuanian media/blogophiles would be to get them on the court. In such a venue, certain trash-talking might be more appropriate.

And gee, does BiE hope that the Luol Deng-to-Bizkaia Bilbao Basket story published on Krepsinis.net isn’t “without substance” as well!