While Barcelona has played host to the Euroleague Final Four three times before, the Palau Sant Jordi has served as home venue only twice; the first of these was in 1998, some eight years after the stadium was opened.

That year’s EL Final Four featured Kinder Bologna making the big tournament for the first time since 1981, led on court by the likes of Predrag Danilovic and Antoine Rigaudeau – and coached by a 38-year-old named Ettore Messina, then winning his first Continental title. Let’s travel 13 years back in time with league historians to the ‘90s; if you’d like to reach further back, BiE’s trip to 1969 is here.

The first Final Four hosted at Palau Sant Jordi, in 1998, proved a good omen for newcomers: Kinder Bologna had been a major team in Italy and Europe before that season, and had even reached a continental title game in 1981, but the title of European champion was elusive. 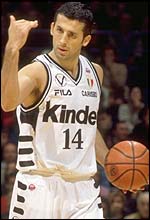 Kinder downed Partizan 83-61 in the first semifinal behind 23 points from Savic, leading 45-25 at halftime and never looking back. AEK edged Benetton, 69-66, in the second semifinal thanks to 22 points from Anderson. With the game tied at 63-63, Prelevic drained the go-ahead three-pointer and AEK held on.

Bologna rounded out a perfect weekend and became the Euroleague champion for the first time by topping AEK 58-44 in the title game, setting a defensive record for the fewest points allowed in a Euroleague final. Indeed, AEK’s leading scorer managed just seven points in the game.

Rigaudeau paced the winners with 14 points and Savic was chosen the Final Four MVP. At age 38, Ettore Messina became one of the youngest head coaches to lift the trophy.