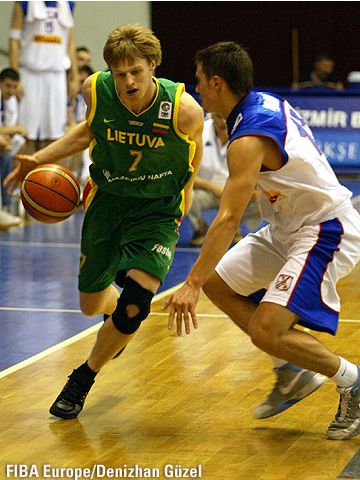 A couple of lower-profile signings were finalized by Euroleague teams yesterday as squads continue to fill out their rosters. In Lithuania, Martynas Pocius returned home after four years as a Duke University Blue Devil, signing with Zalgiris Kaunas on a three-year deal. Meanwhile, Pawel Kikowski jumped from current Polish Cup titlist Kotwica Kolobrzeg to Union Olimpija.

(Euroleague.net) — Zalgiris Kaunas signed Martynas Pocius, bringing the shooting guard back to his home country after several seasons in the United States. Pocius (194 cm, 23 years old) signed a multi-year deal with Zalgiris, which includes a team option through 2012. He arrives from Duke University, where he spent the past four seasons under famed coach Mike Krzyzewski. Pocius saw limited action in 22 games last season, averaging 1.5 points per game. He recently represented Lithuanian at the World University Games and has also played on the Lithuanian junior national teams at the under-18 and U20 European championships. Pocius was the third-leading scorer at the 2006 U20 European championships in Izmir, Turkey, averaging 20 points per game.

Union Olimpija announced the signing of swingman Pawel Kikowski, who arrives from Kotwica Kolobrzeg in his native Poland. Kikowski (193, 23) and Olimpija agreed to a three-year deal. Last season he averaged 12.4 points and 2.4 assists and played outstanding defense in the Polish League, helping the club finish the regular season in third place and win the Polish Cup for the first time in club history. Kikowski grew up at Kotwica and also spent one season at Polpak Swiecie. He has been a member of the Polish national teams at the Junior and senior levels and is on the preliminary roster for the 2009 EuroBasket in Poland.