List of European champions, 2011-12: End of May update edition 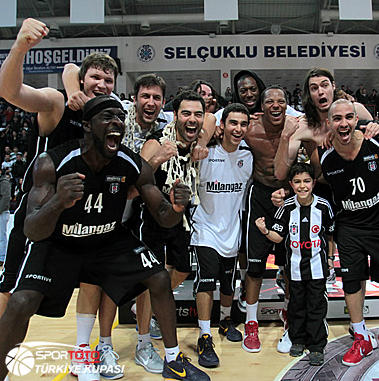 Can the Eurochallenge champions add a TBL title?

Basketball grinds on in Europe’s three dozen or so domestic leagues and so BallinEurope today updates the “List of European Champions” page. Since last posting, new champs have been crowned in Israel (guess who), Slovenia, Austria, the Czech Republic, Holland, Luxembourg, Portugal and Romania.

Things are progressing meanwhile in Europe’s larger leagues including Spain, Greece, France, Italy, Croatia, Serbia and Germany, and entries for these countries have been updated as well. Plus, new highlight clips and links have been peppered into the list as well; scroll down for BiE’s honorary roll call of European basketball champions.

Belgium: The Ligue Ethias championship will be contested between Eurocup team Telenet BC Oostende and Euroleague qualifying round side/fourpeat defending champions Belgacom Spirou Basket after both swept best-of-three series in the semifinals. The winner-take-all match goes down tomorrow night.

Bulgaria: In seeking its 11th consecutive Bulgarian championship, Lukoil Academik has a commanding 2-0 lead in the best-of-five championship series against BC Levski Sofia. Lukoil has now gone 67-3 overall in the past two seasons, including a 4-0 mark against Levski this season.

Croatia: Something like redemption may be rewarded the recently financially-trouble Cibona Zagreb. Having already taken out defending champions KK Zagreb in the semifinals, The longtime local powerhouse took a 1-0 lead over Cedevita Zagreb with an 84-77 win on Saturday.

France: Orléans and Elan Chalon/Saône have advanced to the semi-final round in LNB play. The other side of the bracket has the Gravelines-Dunkerque vs. Cholet Basket and Le Mans vs. SLUC Nancy series knotted up at 1-1 with the decisive game threes scheduled for Tuesday.

Greece: The traditional Panathinaikos-Olympiacos clash in the Greek League championship finals has been as tight as expected. Olympiacos defended home court in game one, taking an 84-78 win fueled by Kostas Papanikolaou’s 16 points and eight rebounds from off the bench; Panathinaikos returned the favor in its place with an 81-79 behind Dimitris Diamantidis’ 23 points. Game three is tonight.

Hungary: Szolnoki Olajbanyasz, fourth-place finishers in 2011-12 Eurochallenge play, now have a 2-1 lead over Falco-Szova Szombathely; game four, set for tomorrow night, will be played in Szolnok.

Italy: After a couple of insane buzzer-beaters got Banco di Sardegna Sassari past Virtus Bologna, this season’s Serie A surprise now finds itself drawing fourpeat defending champions Montepaschi Siena in the semifinals. On the other side of the bracket, it’s a Euroleague matchup between Emporio Armani Milano and Bennet Cantù. This round begins tomorrow night.

Poland: Asseco Prokom looks to make it eight straight PLK titles on Tuesday, as they’re currently holding a 2-0 advantage over Trefl Sopot in the best-of-five series there.

Serbia: The Serbian Super League is down to its final four contenders; Radnicki KK gets Crvena Zvezda while aspiring Vojvodina will meet Euroleague side Partizan Belgrade.

Slovakia: Prievidza took its first national title in 17 years in Slovakia, winning over Komarno; both teams had gone 22-10 and were tied atop the regular-season standings.

Spain: Spain is down to its final four teams in 2011-12 and things are starting to get seriously interesting. Real Madrid managed to fight back from a game one loss against Caja Laboral Baskonia yesterday with a 73-64 win to even the series; Valencia BC meanwhile shocked FC Barcelona today in the Palau, 81-76, behind Rafa Martínez’ 18 points and four assists plus Nando de Colo’s 16 points and five assists.

Turkey: The Beşiktaş Eagles’ bizarre, land-on-their-feet season that began with the signing of Deron Williams and the team’s bouncing from Eurocup qualifiers continues with their defeat of Galatasaray in the Turkish League’s semifinal playoff round. With the Eurochallenge trophy already theirs, the Eagles will now face off against the Euroleague’s Anadolu Efes, who’re looking to regain the TBL title they last lofted in 2009.

May 27, 2012ballineurope
Powered by Sidelines
Share on FacebookShare on Twitter
This post was published on May 27, 2012
Serge Ibaka will even block your accessRed reign forecast? Olympiacos on brink of Greek title after beating Panathinaikos, 84-72