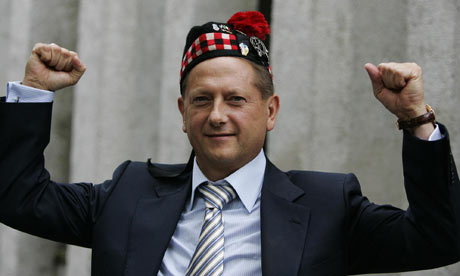 Stepping outside the realm of the Euroleague playoffs for just a moment, BallinEurope was saddened to hear quite the insidious story of BiE fave Martynas “Air” Pocius’ season-ending injury.

As though not bad enough that Pocius is gone for the traditional LKL championship series between Žalgiris Kaunas and Lietuvos Rytas, BiE buddy Simonas Baranauskas yesterday reported on LithuaniaBasketball.com that Marty’s “injury could have been caused by alternative treatment” prescribed by a, let’s say, underqualified party.

Pocius is currently in hospital after undergoing back surgery earlier this week; the player reportedly suffered from a pinched nerve due to a spinal compression fracture – but according to Baranauskas, word has it that “the injury could have been caused by rather negligent actions from the club in treating a rather [minor back problem].”

The culprit? Quite possibly wacky Heart of Midlothian/Žalgiris team owner Vladimir Romanov, whose interference with his teams may have extended from personnel (mis)management, dictating player rotations and handling PR for his club into the healthcare sphere. Writes Baranauskas: “It has been rumored that the club’s owner Vladimir Romanov order ‘alternative healing methods’ which could have caused the actual fracture and is perhaps why Pocius needed the surgery in the first place.”

Indeed, speculates Baranauskas, in “the worst-case scenario, [the exacerbated injury] could have even ended the player’s career.”

Despite Romanov’s best efforts to inexplicably subvert his team out of another chance to regain the LKL title, however, Žalgiris still managed to overcome L. Rytas in game one of the best-of-seven championship series, 83-81, yesterday.