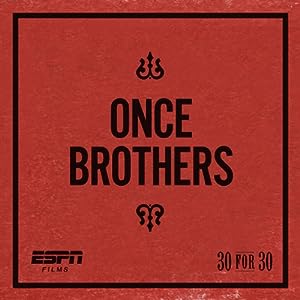 Tomorrow night will see the ESPN premiere of the latest in its “30 for 30” documentary series, “Once Brothers.” This film focuses on the Yugoslavian basketball squads of 1988-1991, dream teams that included rosters filled with names such as Vlade Divac, Drazen Petrovic, Toni Kukoc, Dino Radja, Predrag Danilović, Stojan Vranković, and Jure Zdovc.

When the former Yugoslavia fell into chaos in a bloody civil war, team cornerstones Divac and Petrovic stopped talking, their close friendship instantly shattered in a moment of time in which Divac’s motivations were misunderstood. Despite the fact that they had entered the history books together as FIBA World Champions and again as the first two Yugoslavians to play in the NBA, they would never exchange a word again.

Petrovic was killed in a car accident following the 1992-93 and until the filming of “Once Brothers,” Divac and the other Team Yugoslavia players had never dealt with the demons of war that still affected their lives nearly two decades on.

A joint effort of ESPN and NBA Entertainment, Michael Tolajian was chosen to run the show in this director-centric series. Tolajian first came to NBA Entertainment straight out of college in 1989, “back when there was maybe 30 people working there,” he says. And while Tolajian has since formed his own production company in Los Angeles and has had a hand in many projects, including the “World Series of Poker” TV program since 2006, he always seems to come back to basketball.

Maybe most notably, Tolajian produced the 2000 documentary “Whatever Happened to Michael Ray?” for NBA Entertainment, a fantastic (and cameo-packed) look at the rise and fall of late 1970s/early 80s superstar “Sugar Ray” Richardson narrated with gusto by Chris Rock. His “I Am A Celtic” is a look at the 2006-07 Boston Three Party as seen through the eyes of legends Sam Jones, John Havlicek and Bob Cousy.

Tolajian talked with BallinEurope about “Once Brothers,” a highly personal story that encompasses much of the human experience itself – as well as present some fantastic international basketball history.

How do you know Vlade Divac and how did this project come together?
When ESPN was discussing the “30 for 30” idea, the whole concept was to go to directors and let them take the creative reins, to come up with the subject matter and how to do it. But they wanted the end results to feel like films, not just documentary dry.

I was working at NBA Entertainment, and they were working with ESPN on a few projects [when the “30 for 30” idea first began]. Many years back, we had done a six-minute feature on the Yugoslavian team and how it had broken apart. But you know: With six minutes, you can’t do anything … Dion Cocoros [NBA Entertainment vice president of original content] and I had done a lot of work with Vlade when he was with the Lakers and especially when he was with the Kings.

We were talking and the idea came up that “This would be a great topic for 30 for 30.” And then I put my director’s cap on and thought, “How can we make this story unique?” Two years earlier, one of our producers had done some shooting in Croatia with Drazen [Petrovic]’s family, so we had a good relationship there.

Eventually, I asked Vlade about the subject and if he would be open to maybe taking a little journey of self-discovery…

Was that difficult for him?
This was a difficult subject, but I think for Vlade and Dino Radja, Toni Kukoc and the rest, it was difficult to talk about it at the time, and it was almost easier for them to talk about it 20 years later, as though it was eating away at them. It was something they really wanted to talk about, but couldn’t [at that time] and this project was like an excuse for them to spill their guts. I know it was cathartic for Vlade and I think it was for some other players as well.

Though this story takes place in a completely different realm and circumstances, do you see any similarities between the story in “Once Brothers” and that of “Whatever Happened to Michael Ray?”
Some. They’re both stories in which the sports are almost secondary – they’re about a person’s life and hardships they have to overcome, that they have to deal with. Non-sports fan were drawn to the Michael Ray Richardson story and maybe [they’ll be drawn] even more to this one, because everyone can relate to the issues in this film.

Both movies were also stories about people who were older – stories of men looking back upon their lives and taking stock of what happened, trying to come to some peace in their lives and trying not to take a lot of bad wisdom into their futures.

Were you surprised by anything during the making of “Once Brothers”?
I wouldn’t call it surprised, but a couple of things were notable. Working with Vlade and with Drazen’s brother and mother – I was struck by how kind they were and how proud of their country. It’s rare to meet people so accommodating and warm.

I was a bit surprised at how close Zagreb and Belgrade are: How similar the people are and yet how different. In general, it was a great experience personally. I had never been to there before and to see this different part of the world was all eye-opening to me.

In the trailer, Divac explains that he’s setting out to “find out what happened.” Without giving too much away, do you think that he finds some resolution?
The process of making the film was definitely a discovery and represented closure for Vlade: He dealt with some issues that he had buried for a while. For Kukoc and Radja, it was therapeutic in a way to get their side out, like they couldn’t in 1991 during the heat of the conflict. And for Drazen Petrovic’s family, any opportunity to talk about Drazen is absolutely welcomed.

What can an American too young to remember Drazen Petrovic or the Yugoslavian war take away from this film?
Well, I’m not trying to get any particular message across, but just want to tell a story. For me, “Once Brothers” was a story that went beyond the court and into themes like war, death, life, friendship and reconciliation.

One thing I think American audiences will get out of the film is how great that Yugoslavia team was up to 1991 when the war broke out; this was a team that put seven or eight players in the NBA: This small state put together a team that was really amazing. It was really a moment in time when all these players came together. In the film, you get some evidence of how good they were and how close they were. They’d spend months in the mountains bonding during training – Croatians, Serbians, Montenegrins, Christians, Muslims … it didn’t matter.

And the other thing for audiences is how horrible war is and how it can destroy families and friendships. The one line that I’ll always remember is Vlade’s quote: “To build a friendship takes years, to destroy it takes one second.”

Oct 11, 2010ballineurope
Powered by Sidelines
Share on FacebookShare on Twitter
This post was published on October 11, 2010
Zalgiris Kaunas supersizes McDonald’s, presents big scarfAllen Iverson on Besiktas “would be a great success”