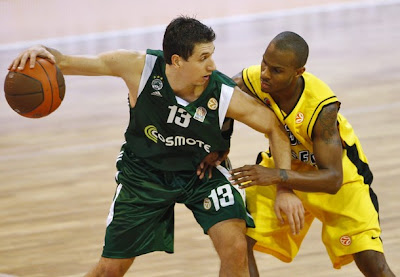 To the surprise of few, Dimitris Diamantidis was named MVP of the 2010-11 Euroleague season last night, thereby completing an individual triple crown in bagging MVP, All-Euroleague first team and Best Defender nods. Equally unsuspenseful was the naming of the All-Euroleague teams – hey, if BallinEurope can go five for five, it must have been obvious, eh?

(Euroleague.net) – The best players of the 2010-11 Turkish Airlines Euroleague season were honored on Saturday night at the annual EFES Pilsener Euroleague Awards Ceremony, held this year at the Museu Nacional d’Art de Catalunya (MNAC) in Barcelona.

Less than twenty-four hours before a new Euroleague champion would be crowned, a who’s who of world basketball elite came together to celebrate another exciting season in a one-of-a-kind setting, the MNAC, that already hosted this event back in 2003.

Panathinaikos point guard Dimitris Diamantidis was voted the 2010-11 Euroleague MVP after an outstanding season for the Greens and became the first player ever to win three end-of-season awards – MVP, Best Defender Trophy and All-Euroleague First Team – since the awards structure was established in 2005.

Igor Rakocevic, the Alphonso Ford Top Scorer Trophy winner, and Nikola Mirotic of Real Madrid, the Rising Star Trophy winner, also received their respective awards. The EFES Pilsener Euroleague Awards Ceremony was attended by hundreds of VIPs and media on the night before Sunday’s title game between Maccabi and Panathinaikos, tipping off at 4.30pm CET (10.30am EST).

May 8, 2011ballineurope
Powered by Sidelines
Share on FacebookShare on Twitter
This post was published on May 8, 2011
On five prospects in the Nike International Junior TournamentRomanian playoffs: Cluj-Napoca meets Gaz Metan Medias in last game of semifinals