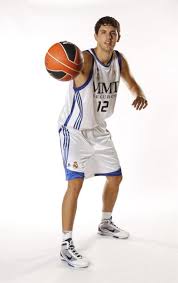 Following up on yesterday’s brief look at five rights-owned European players developing their games on The Continent, today is offered another quintet for your consideration. Fans of Chicago, Charlotte, and San Antonio will particularly want to pay attention – and tune into some Euroball in 2012-13…

• PF Nikola Mirotic, Real Madrid (2011 NBA draftee; rights owned by the Chicago Bulls).
Few players are more greatly anticipated – and few could be more immediately useful to such an injury-prone frontcourt – in Chicago than Nikola Mirotic.

Mirotic rolled on last season after bagging the Euroleague Rising Star award for 2010-11, nearly doubling his EL scoring average from 6.6 to 12.5 ppg; not to mention a like increase in touches. Unfortunately for Bulls backers, Mirotic is contracted to Real through 2016 –although he’ll only be 25 years old by then and BiE wouldn’t be surprised to see Chicago at least attempt a hefty buyout within the next four seasons.

• SF Dāvis Bertāns, Partizan Belgrade (2011; San Antonio Spurs). Envisioned as something of a long-term prospect in that San Antonio draft-and-stash style (damn them), Bertāns had to have impressed Spurs scouts at EuroBasket 2013 qualifying games: At 14.1 points per game, Bertāns helped squeak his Team Latvia into the big tournament. The then-not-quite 23-year-old showed leadership qualities beyond his age, too, taking the team under his wing for perhaps its ultimately two most important matches in the round: games 1 and 5 against Bosnia & Herzegovina: In these two matches (the first a three-point loss in Bosnia, the second an emphatic 15-point win), Bertāns racked up 42 points, 13 assists, 12 boards and four steals.

BiE’ll be looking for Bertāns to get a key role with the again stripped-down Partizan in this year’s Euroleague; like Mirotic, Bertāns is signed through 2016, but those Spurs can surely wait in hopes that the Latvian’s skills continue to develop.

• G/SF Nick Calathes, Lokomotiv Kuban (2009; Dallas Mavericks). Labeling Calathes a potential future NBA player may seem to be a bit of a stretch; after all, BiE would guess half-life for European prospects signing after being drafted is about three years, i.e. after three years of not playing in the NBA, the European player becomes increasingly less likely to make the jump across the pond. Call it the Nando De Colo Rule (or for pessimists, the Sergio Llull Rule).

On the other hand, few European draftees have the experience in American hoops that Calathes does. Already a dual citizen of the US and Greece, Calathes was drafted after two years and one All-SEC First Team bid with the University of Florida Gators.

Calathes drew particular attention over here in the 2011 Euroleague playoffs with his outstanding play and versatility in positioning throughout Panathinaikos’ runs in Europe and Greece. When PAO blew up the team this past offseason, Calathes took up Lokomotiv Kuban’s offer of a leader role for two years – but his intention to play with the Mavericks appears a firm goal even if rumors from June ’11 and June ’12 didn’t pan out.

• SG Ádám Hanga, Assignia Manresa (2011; San Antonio Spurs). Damn straight BiE’s gonna push the Hungarian product! In his quest to become the second-ever Hungarian national to play in the big league (after the immortal Kornél Dávid), Hanga took another step on the career ladder in moving up from the Hungarian domestic league to Liga Endesa squad Assignia Manresa last season. In between that and this season’s tipoff, Hanga put in an admirable performance in this summer’s EuroBasket 2013 qualifiers with an impressive line of 16.1 points, 2.3 steals and 1.0 blocks per game. (Keep in mind vis-à-vis the last stat that Hanga’s listed at 6’7”.)

After the 2011 Adidas Eurocamp, Draft Express touted noted that Hanga “could be a player a team decides to roll the dice on somewhere in the second round to see how he develops over the next few years in Europe.” At present it appears Hanga’s evolution is proceeding nicely and that once again the ever-prescient Spurs have chosen a good one again. *Damn* them.

• Dario Šarić, Bilbao Basket (maybe) (2013 probably, 2014 surely; no NBA team). Okay, so BiE’s cheating a bit here, but The Next Big Thing Out of Croatia is certainly destined for an NBA career and BiE would certainly hedge on a successful one for the lad. Of course, this assumes that we’ll get to see Dario at any point this season…

Šarić apparently wanted to continue on a rational career arc, seeking to make the jump from his hometown KK Zagreb to the Liga Endesa when he reportedly signed a contract with Bilbao in late July. Though Croatian media was hot to report the possibility of Šarić *then* transferring from Bilbao to Cibona Zagreb, the deal was stymied on the FIBA level when a dispute arose regarding (what else?) compensation fees: KK Zagreb officials were reportedly demanding as much as €1 million for Šarić’s transfer to Spain.

Last Friday, Croatia-based Index.hr quoted Šarić’s father as stating that the deal between Bilbao and KK Zagreb would be completed before day’s end. As of today, however, Šarić is listed in the KK Zagreb roster on the team’s official website and he did not play in Bilbao’s opening game in Spain.

Perhaps Šarić could use a rest … all he did this summer was make the big jump to the men’s senior team to lead the 8-0 Team Croatia in rebounding with 6.3 boards while putting in 9.8 points in just 19.3 minutes per game. Oh, and this was a few *weeks* after his MVP bid for his winning national team in the FIBA U18 European Championship.

Dario Šarić: If you don’t know the name already, remember it now.