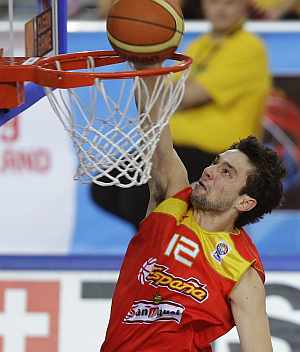 The Houston Rockets may have thrown $2.5 million away if Real Madrid reportedly has its way: According to Spain-based sports news outlet Marca, Sergio Llull has been offered a six-year contract extension with an option year from the Euroleague club. While some have speculated on a scenario in which the Spaniard might join the Rockets for 2013-14, this offer is seemingly designed to scupper any such plans.

The Rockets are said to have made an offer to Llull immediately upon the NBA free-agent signing period opening and were enthused by his play for Team Spain in the 2012 Olympic Games (though BallinEurope not so much). The NBA club owns the rights the Madridista after buying them for $2.5 mil (worth about €2.125 million today) from the Denver Nuggets in 2009; not an unexpected reaction from a team that lost Goran Dragic and Kyle Lowry from the backcourt this offseason.

Marca had reported earlier that Sergio’s father Paco Llull wasn’t too concerned about the Houston option, as his son “is a Real player.”

Aug 29, 2012ballineurope
Powered by Sidelines
Share on FacebookShare on TwitterShare on Google+
J.R. Holden: “In 10 years, I see myself possibly being a GM in Europe”FIBA EuroBasket qualifiers: Will Jonas Jerebko play against Team Bulgaria?