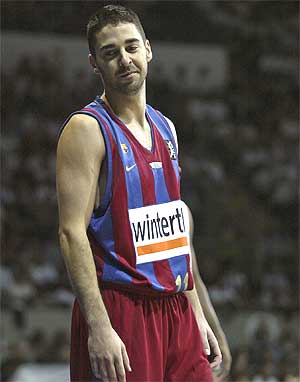 Guess that game two loss was little more than a speed bump, eh? Anyone who supposed that FC Barcelona was vulnerable after getting taken down by Real Madrid last week (ahem) can again repress doubts about Xavi Pascual’s team after last night’s dominating performance against their ACB “rivals.”

That’s right, that “rivals” is in quotes; despite Madrid’s game two victory – in fact, paradoxically *because of* the win – it becomes increasingly apparent as the 2009-10 draws to conclusion that the gap between these teams is quite significant indeed. Whilst Madrid had to go all out and expend all available resources in beating a team that shot 33 percent from the floor, Barça has handled Madrid decisively in four meetings of five between the teams this season.

Last night, mighty Barcelona effortlessly cruised to a 15-0 run in the first quarter, clamped down the D in the second quarter, assembled another 11-0 run and by the time it was 34-17, Barcelona was on cruise control. The final score of 84-73 was hardly indicative of the one-sidedness of this match. But see for yourself; short and long versions of the highlight clip runs below, featuring Madrid’s Ante Tomic and just about every Barça cager, including Boniface N’Dong, Ricky “The Human YouTube Video” Rubio and especially Juan Carlos Navarro. Who can stop the Blaugranas?