The critical week four of Euroleague Top 16 action is in the books, but Ball in Europe’s man in Italy, Francesco Cappelletti, is still musing on the shifts ‘n’ events thanks to these eight games. This week’s frank roundup wishes Panathinaikos bye-bye, gives mucho deserved props to Pini Gershon, and bestows an “accolade” upon Zabian Dowdell. Read on!

Goodbye Panathinaikos
Before this week, it seemed nearly impossible that Panathinaikos would put itself again on the road to the playoffs. The evidence for the Greens’ struggle weren’t in the numbers which still didn’t damn the defending champions, but somehow it was all in the body language, the play expressed by a group which showed complacency and an unwillingness to fight, to get their hands dirty.

Maybe Zelimir Obradovic thought his men would have woken up when it counted; instead, even against Regal FC Barcelona, into an in-and-out game whose content must recall for Mike Batiste and his teammates remember not-so-faraway times, PAO looked like the same squad devoid of motivation, tactical themes, and unselfishness that appeared during the first phase. FC Barcelona simply had to stay close to the Greens until the final moments, when it was cleared which was the real united group and which was a jumble of overpaid men – though not overrated, be careful – unable to unify.

It is remarkable that Panathinaikos has never been competitive in the season following a Euroleague title. The 2001-2002 triumph at Bologna wasn’t followed by a positive European campaign, i.e. elimination in Top 16 play by Fortitudo Bologna and the newly-arrived Montepaschi Siena, the absolutely stronger 2006-2007 edition (including Sarunas Jasikevicius and Vassilis Spanoulis on board) which could not overcome Montepaschi *again* and Partizan Belgrade.

This story was repeated this season, yet it’s very difficult to find a common thread among these … yes, these disasters. Look at the rosters of the present-day clubs: They’re even better than the previous champions’. On the bench, the name Zelimir Obradovic is a guarantee. Probably this latest version of Pana lacks leadership, a task suitable to Dimitris Diamantidis, unfortunately injured for too long to take that role as well as he did last year.

In 2002, there was Dejan Bodiroga and in 2007 Ramunas Siskauskas. In 2010? Well, there’s the Spanoulis/Diamantidis/Nikola Pekovic trio to exploit, with new faces coming in to replace Batiste and Drew Nicholas, both expected to leave Athens. We’ll see if Obradovic will choose to change countries and awaken a glorious era just closed. Further, he went wrong in deciding to bench Nick Calathes, Milenko Tepic, Giorgi Shermadini and the other youngsters, despite a season that started bad and continued worse; Obradovic has to understand that.

Respect for Pini Gershon
The forecast for Group E just after the draw: Real Madrid was the favourite, Montepaschi was the most solid, Efes Pilsen represented the best example of the underdog. Nobody talked about Maccabi, apart from its home factor at historic Yad Eliyahu. “Whoever wins in Tel Aviv is going to be assured of first place,” many “experts” said. With four games gone, those experts should redeem themselves and give some credit to the Israelian team. And specifically to Pini Gershon. 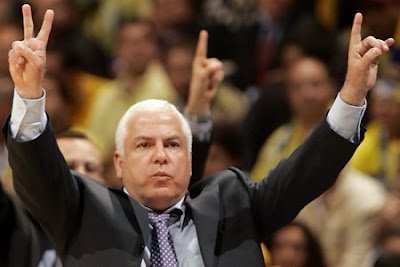 You can love him, you can hate him, but you have to judge Gershon on what he’s done in his career with Maccabi. I don’t think failures as the head of Olympiacos and the Bulgarian national team are representative of his reputation, because Gershon is strictly connected to the Yellow Army. I mean, coaching Anthony Parker, Sarunas Jasikevicius, and Maceo Baston, it was easy to establish himself as the most celebrated commander-in-chief across Europe. But Gershon gave Maccabi an identity, marking what was considered the best basketball seen on The Continent since the early 1990s.

Gershon is not only a great communicator, as even some denigrators maintain – but a spectacular actor on the sidelines: Here we have an expert of the game who can bring his team through the Top 16 “Group of Death” as the number one seed.

In Istanbul, Gershon created another masterpiece, losing but holding the scoring differential. Maccabi played the match Gershon wanted, with slow pacing and stifling defensive pressure, which allowed the team to hide its limitations while accentuating “His Majesty” Alan Anderson. Efes could destroy opponents thanks to its major weight advantage in the paint and longer rotations (once Ergin Ataman rediscovered Igor Rakocevic and Bostjan Nachbar). Gershon held Efes to 63 points, emerging as the real winner of a game in which his best player had scored 16 points below his average.

Let us not forget: Maccabi Tel-Aviv can win Group E with a roster sporting Raviv Limonad (from Hapoel Nahariya), Guy Pnini (previously at Hapoel Jerusalem, then FMP Zeleznik and Keravnos), Doron Perkins (last year with Maccabi Haifa), D’Or Fischer (with Bree two seasons ago), and Italian league rejects Andrew Wisniewski and David Bluthenthal. These guys are not Jasikevicius and Parker. They have not evolved into phenomenons.

Regrets
Balance reigns, as everyone guessed. So someone might be desperate in two weeks when the qualifications are definitive, looking to what went wrong, to what was missing. Montepaschi Siena could regret the crazy choice to not foul Sergio Llull on the final play against Real Madrid, while just the previous week they’d let Darjus Lavrinovic score a triple in Siena at the buzzer.

In week one, David Hawkins didn’t take a final shot, throwing away the opportunity to boost a small margin (+4) against Maccabi Tel Aviv. Caja Laboral won at Khimki with the same +11 that Sergio Scariolo’s boys inflicted them in Baskonia: Now it’s up to the Spaniards to go to Athens and win a game crucial to their ambitions, because Khimki’s schedule is better.

Maroussi BC stayed in the game in Pionir, and while Partizan won by three points, that margin of victory was useless in counteracting the 57-49 game in Athens. Panathinaikos will be the test for both teams: Dule Vujosevic counts on returning Aleks Maric to beat them next week at home, then hopes Obradovic doesn’t want to end his first Euroleague Top 16 without a W. Week 6 offers a Maroussi-Panathinaikos matchup already sounding juicy. 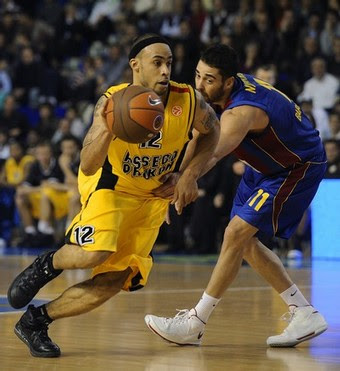 Mumble mumble…
The key to reading Prokom’s rise is in three players: Ratko Varda finally has stats (9.5 points and 4.2 rebounds per game with 50% shooting on two- and three-pointers) and impact at the elite level; Qyntel Woods has elevated the quality of his game during the Top 16 and will be a hot commodity on next summer’s market; David Logan has increased all his numbers from the regular season in the Top 16 (in the regular season, his line read 15.9 ppg, 3.0 apg, 56% two-point shooting, 32% three-point shooting, 3.0 turnovers per game and a 12.1 ranking, while his stats for the Top 16 are 16.5 ppg, 4.0 apg, 59% and 37% shooting, 2.0 tpg, and 15.8 ranking) … Zabian Dowdell is the captain of the category of US Players Interested In Playing Euroleague Ball Just To Be Seen By NBA Scouts; in Kaunas, he went 4-of-14 in 19 minutes on the floor … Mario Kasun has never bettered the 24 minutes of playing time he got against Maccabi. And he was as decisive (14 points and 13 rebounds) as he was against Siena (17 and nine in 18 minutes) … Terrell McIntyre is an awful 11-of-37 from the long distance. His qualifications for an All-Euroleague team are going down … Olympiacos could have informed us there would be All-Star Game played in Zagreb: The Reds scored 97 points on going 27-for-41 on two-point shooting, 10-of-17 from three, and 23 assists. Cibona’s Jamont Gordon notched 40 points, the second-best scoring performance in this Euroleague…

Feb 28, 2010ballineurope
Powered by Sidelines
Share on FacebookShare on Twitter
This post was published on February 28, 2010
Eurocentric highlights from last night’s NBA actionBig Z boomeranging back to Cavaliers