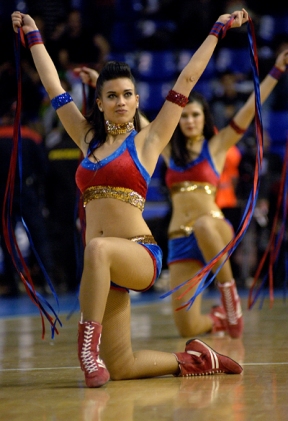 It's all good in Barcelona

Once again, BallinEurope.com contributor Francesco Cappelletti weighs in on all the happenings in Europe’s top basketball league in week five of play in ruminating on just how good FC Barcelona is; on CSKA Moscow’s resurrection due to coach Pashutin and possibly the “heart of a champion”; and on a flashback to one year ago.

The perfect game
Regal FC Barcelona made easy work out of dumping Montepaschi: That was FCB’s statement game for this Euroleague season, and we have to pay attention because it arrived against a team which had deliberately risked a questionable Ksistof Lavrinovic (plagued by back spasms) in trying to keep its streak of 27 consecutive home wins alive.

But the Spanish primacy was huge. Siena couldn’t play its own game, simply because Xavi Pascual denied it. Pascual decided to take Terrell McIntyre out of the match, nearly double-teaming him on pick-and-rolls, and the choice paid large dividends: T-Mc wasn’t able to find a clean three-point shot from his preferred central position while obsessed by Rubio’s speedy hands. Meanwhile, neither Benjamin Eze or the injured Lavrinovic represented a threat in the paint, where others not involved with McIntyre rotated very well.

Then the difference near to the basket between the two teams made up the remainder. Barcelona’s four big men brought 45 points to the cause, going 16-for-22 from inside the paint: a showing that Montepaschi hasn’t the numbers to replicate. Even more, Barcelona’s one-on-one defense was astonishing and was the real reason Montepaschi couldn’t run to increase the tempo, as they usually do (scoring 65 points in Siena is an absolute minimum). On the other hand, Montepaschi had to guard five dangerous players at a time, making it impossible to poach the passing lanes as they do in the Italian League. No steals, no transition, no fast-break points were evidence of the physical predominance of Boniface N’dong and companions.

After the game remains the conviction that Regal FC Barcelona is probably the best team at this moment in Europe, while Montepaschi Siena is a step behind, afflicted by the Rimas Kaukenas-David Hawkins change that, in Euroleague, makes them well unbalanced against Real Madrid.

Turkish Fenerbahce and Efes Pilsen have the same 5-5 combined that they had in 2008-09, but this is a worst result if we consider these teams’ ambitions. Entente Orleanaise and Asvel Basket has amassed the same bad record (1-9) SLUC Nancy and Le Mans did. The records of CSKA Moscow (this season 3-2, one year ago 5-0) and Maccabi Tel Aviv (4-1 instead of 3-2) match the team’s respective budget reductions/supplements.

I mean, stats are not so important, because season’s really just started and teams are not at their final edition, but some facts are to be underlining. One year ago, Olympiacos was at first place in a not-so-challenging group (Cibona, Le Mans, Avellino, Maccabi, Unicaja) but lost in Zagreb and allowed 93 points (!) in France, so this season’s struggles outside Piraeus have an origin. Lottomatica Roma faced a similar group (with Tau, Fenerbahce, DKV, Union Olimpija) and had the leadership, but in Ljubljana they took a win rather than the disastrous 17-point loss achieved the previous Wednesday.

“Never underestimate the heart of a champion”
That was what Rudy Tomjanovich said when he was at the top of the NBA, coaching the Houston Rockets in the 1990s. That’s what happened in Vitoria, where CSKA has been reborn after a disappointing season start. Evgenyi Pashutin has avoided dismissal by trusting his stars, those who made Moscow great and were set aside during the first four weeks of Euroleague play. Pashutin understood the Russian League was the field in which Anton Ponkrashov & Co. could mature, rather than in Euroleague ball. So in a match crucial for CSKA’s hopes to return to the top of Group C, Pashutin but the burden on Ramunas Siskauskas, J.R. Holden and Trajan Langdon’s shoulders.

This trio answered with a big game, a 24-12 lead after 10 minutes, and almost all the points of a dramatic fourth quarter, moving Tiago Splitter and his Caja Laboral closer to Red Army than in the first half. Good news from Sasha Kaun’s planet, but without the 37 points made by Siska and the Alaskan murderer, Pashutin could have been CSKA’s coach no longer. Instead, he can dream of first place, thanks to a helpful schedule that gives the Russians home games against Maccabi Tel Aviv and Caja Laboral Baskonia.

Mumble mumble…
Ioannis Bourousis is the key for Olympiacos: seven points in 22 minutes at Pionir, none in three minutes at Malaga, and two Oly losses. But there’s a defensive issue for Yannakis, whose squad has suffered 86 points in both games away from Athens … Rome like a prawn: two consecutive stops after a 3-0 beginning. At Olimpija (lacking leader Matt Walsh), Lottomatica scored seven points in the second quarter, and after halftime coach Nando Gentile cleared space for the reserves, disgusted by his US players’ performances. Before them, meanwhile, former Lottomatica guard Sani Becirovic put in 24 points and earned a 30 ranking … Unicaja Malaga is 5-0, and can breathe even in ACB, where it’s 3-6 after a 0-5 start … Real Madrid keeps on nailing three-pointers: The team went 9-for-16 against AJ Milano, and at 44% is the best Euroleague team in this statistical category … Mike Batiste is back with 25 points on 9-of-11 shooting and six rebounds in 21 minutes … Compliments to Partizan, and their choice in giving Aleks Maric a mountain of minutes. He went for 23 and 15 against Olympiacos, and is averaging 16.2 points and nine rebounds per game….