2012 Olympic basketball: The perspective from Spain on the gold-medal game (plus really specific Official Fearless Prediction™)

Marc and Pau: So key yet again

The Liga Endesa official website editorial staff today attempts to answer the question on the mind of USA-detractors and underdog-backers, i.e. “¿What must happen for Spain to win Olympic gold?” Below runs an extrapolation of the article, featuring eight bits of advice of varying degrees of difficulty, plus BallinEurope’s own ever-lovable Official Fearless Prediction™ on the final game of the 2012 Olympics.

Team USA is transparent enough that everyone seems to know their weaknesses and how to exploit them; the blueprint is universally known, but no one is able to implement the game plan. The enormous quantity of talent on Team USA means that playing even a perfect game does not translate to a win.

“We will try not have too many possessions, not miss many shots and control the boards,” said Juan Carlos Navarro. Doing it all at the same time is difficult, but we will try. I don’t know if we’ll reach 100 points … but the points are not important. [What’s important is] to play good defense.”

What else must be done:

• Limit turnovers. It is evident that the U.S. defensive pressure up top results in many steals that finish with easy baskets on the other end. Attacking with the ball and getting off to a quick start offensively is key to the USA game. And against Team USA, passes to the wing or inside expose the offensive to further losses amidst the quick hands and speed of the American defenders.

• Slow the pace. The average score for Team USA is the highest of the games with an enormous gap thereafter: Averaging 116.7 points per game, Team USA is 29.1 ppg above second-high scorers Argentina. Spain is sixth with 78.1 points, 38.6 fewer than its rival in the Olympics’ final game. Team USA has traditionally been lethal when running: scoring with ease, closing with highlight plays…

By minimizing turnovers, controlling the long rebounds and offensive boards, transition offense is reduced and U.S. may be forced into halfcourt. There Team USA has had some problems … until this year. Team USA has the most capable halfcourt attack in recent years. With a player like LeBron James plus outstanding scorers like Kevin Durant, Kobe Bryant and Carmelo Anthony with the team’s ability to exploit their strengths collectively, the U.S. no longer suffers in a slowed-down game as before. Still, slowing down the game remains important.

• Take advantage of superiority in the low post. Spain has the best inside game of the Olympics, buoyed by its NBA trio: Pau Gasol, Marc Gasol and Serge Ibaka. Team USA has a single center, Tyson Chandler. This is publicly known as Sergio Scariolo’s trump card. Spain must be able to get passes into the low post for Pau to take advantage of a potential mismatch in defending (taking on Pau will be LeBron James or Carmelo Anthony on many occasions, either giving up 10cm/4” in height). In addition, the Spanish big man hope to draw attention to ease the trademark ball movement outside, create spacing in the interior and open up the outside shot.

• Contain the outside. With an athletically superior perimeter offense which might include Bryant, Deron Williams, Chris Paul, Russell Westbrook and even Andre Iguodala, Spain must protect the exterior.

• Prepare alternative zone defenses. How many alternatives to the traditional looks has Scariolo prepared? Spain has brought a wide variety of zone defenses in this Olympics, but the friendly against Team USA in Barcelona (a 100-78 American victory) should have shown the necessity for reserve plans. With a zone defense, problems involved with going one-on-one may be mitigated, and the advantages in pairings of LeBron and/or Carmelo against Pau and/or Marc may be exploited to the fullest. Thus, the zone appears as a defensive variant Scariolo may use for many minutes – though it remains to be seen in what form, when and how these defenses will work.

• Show true colors. Team Spain has not shown his best in these Olympics; their potential was seen for brief moments such as the first half in the first Russia game or the second of the second Russia match. Not playing at fullest potential makes it very difficult to believe that Spain can beat the Spain. The question is, with Scariolo frequently citing concerns about fatigue and minor injuries, is Team Spain capable of returning to playing at 100% of its theoretical capacity? 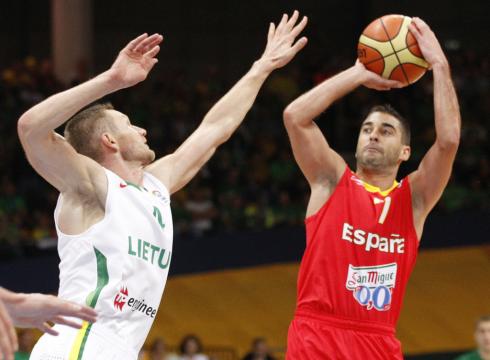 • Hit the threes. Spain has lived with offensive woes for nearly the entire Olympic tournament. Beyond the evidence that the team still has not found its rhythm, the scoring collapse has its origin in many individual instances and errors outside. When Spain cannot score from beyond the arc, a cycle of desperation and offensive mistakes follow. When the triples start flowing (as in the second half against Russia), everything else seems to improve exponentially.

In seven games, Team Spain shot 32.8% from beyond the arc, but success has been lacking in a few critical encounters, i.e. against Great Britain (23.5%), Russia in group play (20.0%), and
France in the quarterfinals (20%). Without the points and the psychological push gained from a good three-point shooting percentage, Spanish victory becomes even more fantastical.

• Reduce Team USA threes. As if it were this easy … the three-point barrage unleashed by Team USA during these Olympics is reaching mythic proportions: Averaging more than 16 threes per game, the USA is averaging a spectacular 44.5% success rate (by far the best in the tournament) and has two men in a true state of grace (Durant and Anthony). The triples have been in many games the spark that fires up big leads. Against Lithuania, the only side to take Team USA down to the final minutes, the Americans shot just 30.3% on threes.

And now, the BallinEurope Official Fearless Predictions™: Let’s see, Team USA is outscoring Los Rojos by almost 39 points per game … the line on the game gives Spain a 21.5-point handicap … but the Team Spain *is* nevertheless bringing the Gasols and Ibaka … and all the pressure’s on Team USA…

And BiE can hardly believe it’s almost over…

Aug 12, 2012ballineurope
Powered by Sidelines
Share on FacebookShare on Twitter
This post was published on August 12, 2012
On the achievements of Team USA, 2012 editionRussia 81, Argentina 77: Alexey Shved leads way to team's best Olympics finish of modern era