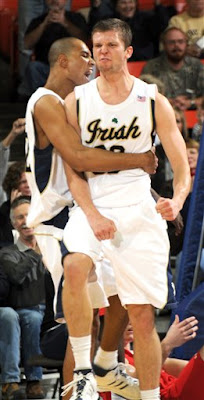 Zach Hillesland has an announcement to make: “After spending five years and six summers in South Bend under the watchful gaze of the hypocritically expensive Golden Dome, I’m ready to leave.

“And where I’m going is Germany. To play basketball.

On July 20, German second-division club Paderborn Baskets announced the signing of Hillesland, the former Fighting Irish baller who missed out on the 2009-10 season due to injury. “So?” BallinEurope can hear you saying. “Another obscure American player goes to another obscure European team … why should i care?”

Well, because Hill has started up a blog entitled “Z Over There” to record his experiences in the (to him) exotic land where he’s relating his Pulp Fiction-esque takes on the little differences in Europe and the measurement of body fat by German doctors.

Zach has only gotten up a few posts thus far, having just arrived in the German burg he insists on calling “The Pottery Barn” – apparently while comedy writing skills are highly esteemed in the Notre Dame liberal arts school, foreign languages are not; Zach, it’s pronounced kinda like this, not so difficult – but his posts are consistent in frequency and worth some hearty LOLs already.

Let’s hope Hillesland keeps up his personal experience blog (so, so few folks do, don’t they?) and best of luck to the Z in Paderborn this season. And remember kids: Never kick the bread!

Aug 19, 2010ballineurope
Powered by Sidelines
Share on FacebookShare on Twitter
This post was published on August 19, 2010
Interview: The Man Who Would Save British BasketballBallinEurope’s 2010 FIBA World Championship power rankings 4.1