Zalgiris loses to Minsk, drops to 2-6 in tight European-league games; what is happening in Kaunas? 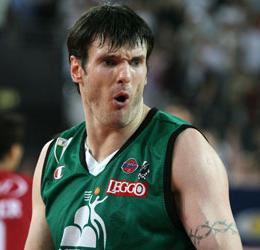 Ksistof doesn’t get it either…

The conversations BallinEurope has with peers in the European basketball blogosphere lately tend to drift toward one team: Žalgiris Kaunas, the hardest luck team in Euroleague basketball.

No, wait, strike that. Let’s start over.

The conversations BallinEurope has with peers in the European basketball blogosphere lately tend to drift toward one team: Žalgiris Kaunas, a team that, in spite of a roster chockfull of experienced talent, simply cannot close out games and fall apart in the clutch.

It’s one of the two, anyway. Or maybe not: Perhaps we can lay the blame at Joan Plaza’s feet (though expectations going into the season were long) or on the subpar refereeing (which might be stretching things a bit considering the sum total of questionable calls in game seven of the Euroleague Top 16 round worked out in the Greens’ favor).

Maybe the front-office issues and lack of payment to players have been overwhelmingly distracting (as Marko Popovic told heinnews and BiE in a recent Taking the Charge podcast interview, “We made a deal at the beginning of the season that this team would stay together until the end of the season, no matter what happens. Hopefully people are going to recognize the way that we play for this club, the way that we show on the court and hopefully the financial status is going to change. We are just focused on the court. Of course we hear the rumors going on around the club but we are trying to be focused, which is not easy, I gotta be honest…”

Maybe it’s none of the above, some of the above, or all of the above. But with Žalgiris now looking at a 4-6 record after another heartbreaker to Real Madrid last week, Lithuania’s remaining representative may have already bad-lucked itself out of a Euroleague playoff spot after starting out at a strong 8-2 clip. An examination of crucial moments may give some insight into the Bizarro equivalent of last season’s Olympiacos squad. Or perhaps not.

Yesterday saw the Greens drop their second crunch-time loss in four days. Žalgiris’ 15-1 run (which included two wins against CSKA Moscow) was brusquely halted by a 1-15 Minsk team, 86-82, in Belarus. The knee-jerk reaction: The Lithuanian side played without energy after the Madrid cliffhanger. But to counter the fatigue, Plaza distributed the playing time among his first 10, with Oliver Lafayette the sole player with more than 24½ minutes of court time.

Tiredness alone can’t explain one particularly appalling turn of events: When Ksistof hit a three to give Žalgiris a 75-74 advantage with just over four minutes to play, who knew this would be the last field goal the Greens would hit? Going 0-for-3 the remainder of the way, Žalgiris kept their opponents in the game. Given the way things have been going this season for the Greens, however, few could consider it a dagger. Sure enough, after a mini-foul shooting marathon began, Dzianis Korshuk turned a too-easy offensive rebound into a wide-open three.

Four days earlier, the 105-104 overtime loss to Madrid neatly encapsulated the woes of Žalgiris, 2012-13 edition. No one gave the Greens a chance to keep pace with Real’s preferred wide-open floor game or even to sufficiently stymie the myriad pick-and-roll combinations Los Blancos are capable of putting together. Instead, Žalgiris entered the game in fifth gear to ring up 29 points in the first quarter – tops for the opening ten minutes against Madrid this season. Kaunas also teed off from everywhere on the floor to finish with incredible marks of 61.1% (22 of 36) inside the arc, 51.9% (14 of 27) on threes for an even 60% overall: The top shooting numbers posted against the Spanish side.

So what happened? It might be easy to say simply “Too much Mirotic,” as the prospective Chicago Bull notably tied the Euroleague record for free throw attempts in a game, drawing nine fouls for eight shots at the line; sure, Mirotic has been taking punishment all year – he’s top 15 in the statistical category in the Top 16 – but that figure eight represents twice the big man’s average. More fuel for those favoring a referee-centric conspiracy theory: For at least the third game in recent memory Ksistof Lavrinovic seemed singled out for contact inside and ultimately fouled out in this game egregiously.

In crunch time of the OT, the ball was in the hands of Marko Popovic, cool-as-ice hero of the Bamberg victory. His miss in the paint was just another whiff in a closing two minutes when Žalgiris went scoreless.

Seven weeks previously, Žalgiris dropped its first meeting with Madrid by another single point. That game is remembered by many – and certainly the Kaunas faithful at last week’s game – as one in which Rudy Fernandez helped solidify his reputation as one of the Euroleague’s best bad boys.

Fernandez’ antics could not have come at a worse time for Žalgiris in that game, as it turns out. Once the metaphorical dust settled, the unsettled Greens had two players out of position after some lightning-quick ball movement from Madrid. One three from Sergio Rodriguez and a fairly good look at an answer by Popovic going awry later, and another loss was in the books for Žalgiris. Kaunas can’t exactly complain about karma for this one, though, as Los Blancos bested the Greens in basically every statistical category – but, but … they kept it so close throughout. Where was the finish?

After the second loss to Madrid, BallinEurope’s Lithuanian agent Y. downtroddenly Skyped BiE with a mini-litany. “Žalgiris, losing a 7 point lead against Real in last 53 seconds and losing by one point is just what I said … regardless of who’s coaching a team … Real won twice against Žalgiris, Bamberg, Alba [Berlin], Panathinaikos in the [closing moments]. They’re 5-1 in Top 16 this year in games that went to the wire – they could easily be 4-6 like Žalgiris.”

So why the difference, Y.?

“I’m not sure if it’s the lack of individual class in the clutch or what. In terms of coaching, good open shots [after which Žalgiris is 0-3 in Euroleague games] and unprepared heaves [with a result of 1-1, the sole win coming on Popovic’s drawn foul for three FTs with 0.00 seconds remaining on the clock] does not seem to make a difference.

Yes, Y. sent that last line twice. It’s that frustrating. Time is not so slowly running down on Žalgiris’ continued Euroleague survival and the 2-6 record reflects a consistency of inconsistency in the clutch; here’s a reminder from earlier in the season, when Y. attempted to uncover the missing piece after the first bunch of squeakers went the wrong way. Today, the sheen of invincibility the Greens had enjoyed in the VTB League may have also evaporated; certainly, this side cannot be inspiring confidence in the locker room or stands.

So what’s the problem? BiE figures it’s got something to do with Romanov…

Mar 11, 2013ballineurope
Powered by Sidelines
Share on FacebookShare on Twitter
This post was published on March 11, 2013
And now, BallinEurope does the Harlem ShakePoll: What is Zalgiris' problem in the clutch?