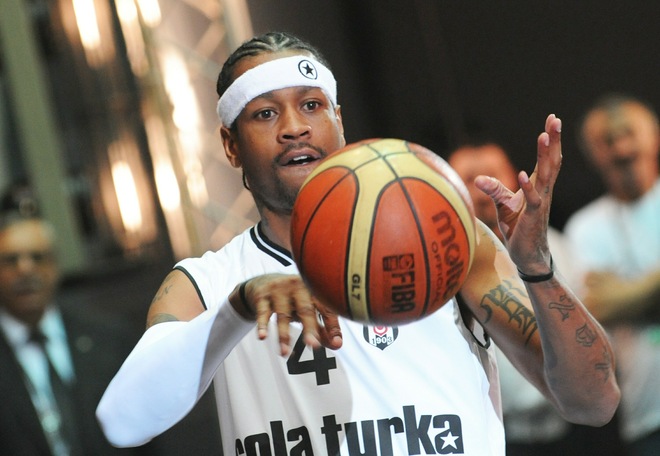 BallinEurope buddy David Hein, hardworking Germany-based sportswriter and brain behind heinnews.com, traveled to Braunschweig last night (lucky bastard) to witness Allen Iverson’s professional debut in Deutschland, as Mr. Answer’s Beşiktaş Cola Turka took on BG Göttingen in game two of 2010-11 Eurocup play. This morning, Hein sent us this dispatch from a nail-biter of a game which left home fans happy and Iverson 0-3 in his European experiment.

The object of interest in BG Göttingen’s thrilling 85-83 victory over Beşiktaş Cola Turka in Week 2 of the Eurocup was clear.

On the one hand, there were signs reading things like: “We talkin’ about practice!” and “Yo A.I. This sure as hell ain’t practice!” And then there were dozens of fans running around with NBA no. 3 jerseys from Philadelphia, Denver, Detroit and Memphis and even no. 4 Team USA jerseys.

Yeah, this was an Allen Iverson crowd.

“My whole thing is to live up to my expectations. That’s all I want to do. Just make sure every game that I play – win or lose – the fans and the people in the city enjoy what they see and know that I’m going to come out and play as hard as I can and give everything I have to this team like I’ve done with everything I’ve been on in the NBA,” said Iverson, who had to watch as Trent Meachum nailed a buzzer-beating jumper for the German club.

“The thing you want to do is try to display your god-given abilities the best way you can and give ‘em something that hopefully they’ll never forget and give them something exciting, something for them to talk about.”

Every one of the 4,202 spectators – a Göttingen club record since the game had to be moved to the Volkswagen Arena in nearby Braunschweig – was hoping to catch a glimpse of the old A.I., the former NBA MVP, 11-time NBA All-Star and four-time NBA scoring champ.

“It was more than glimpses,” said Göttingen’s American coach John Patrick. “He had 18 points. He didn’t play a whole lot of minutes. But it showed that he’s really dangerous one-on-one. Even though we knew what his tendencies are, somehow he’s able to get his shots off and his balance is so good. Especially when you think that he’s 35 years old and he hasn’t played that much. And he’s still able to do this.”

Iverson showed he is getting more and more used to the European game: He collected a season-high 18 points in a season-high 31 minutes, shooting 5-of-11 from inside the arc and 1-of-2 from beyond it while knocking down all five of his free throws and collecting one rebound and one assist.

He did commit a game-high five turnovers, however, including a travelling call typically made on Americans shortly after arrival in Europe and an offensive foul charge on a drive with 44 seconds left.

“I guess it’s just gonna take some time for coach to figure how he’s going to use me and try to figure out and learn the things that I know how to do on the basketball court that will make us effective,” said Iverson, who also admitted that he’s still trying to learn the Beşiktaş play calls. Patrick: Iverson's got the, um, heart to play in Europe

Iverson also hopes he can learn how to get Beşiktaş in the winning column, with the Turks 0-3 in TBL and Eurocup play with Iverson in the lineup.

“Just coming here and losing my first three games gives me a bad taste in my mouth. But the only thing it does is encourage me to get better and learn the system and fit in better than I am,” said Iverson, who started the game and played the first 19 minutes of the first half before getting poked in the eye.

One concern for Iverson fans is that Beşiktaş came back from a 14-point third quarter deficit to take the lead in the fourth period with “Mr. Answer” on the bench and Beşiktaş coach Burak Biyiktay using the Turkish quartet of Cuneyt Erden, Bekir Yarangüme, Serhat Cetin and Ismail Cevik along with Polish international Michal Ignerski, who was clearly the top man for the guests with 21 points and seven rebounds.

In the post-game, Iverson also said that he is not thinking about a return to the NBA and that finishing his career in Europe would be an option.

“No, [the NBA] is not a goal of mine. That’s a goal I have already accomplished. I already accomplished being an NBA basketball player. I’ve done a lot of things in that league that not too many people have had a chance to do and have the luxury to perform at that level. I’ve done a lot of things that I’m proud of in the NBA for the years that I was there,” said Iverson.

“I’ve accomplished so many things. And my heart is here now. This is what I want to do. Obviously this team gave me an opportunity and gave me a chance. And I think I would be letting them down if I was just focused on getting back to the NBA. My focus is on getting this team better and doing everything I can for this club. If I can have it my way I would finish my career right here.”

Iverson without a doubt has one supporter: that being Patrick, who is from Washington D.C. and went to high school in Georgetown, also following Iverson’s storied high school, collegiate and professional career. Patrick is particularly impressed with Iverson’s decision to come to Europe – and with his quick adjustment.

“I’ve coached against a lot of ex-NBA players overseas. I’ve coached a bunch and coached against a bunch, and usually it’s a shock and it takes weeks, if not months to adjust to the European game. It’s 10 days since his first game, no, seven days after his first game, and he comes out and gives us 18, and we were prepared to double him and run out at him and do things that we thought he didn’t see in the NBA with running and help defense and tripling. And he still was able to score. So, I have a lot of respect for Allen.

“I wish him the best and I hope he realises that this is not really a step down. He’s got the balls, so to speak, and he’s got the heart to go overseas and give it a shot even though he had such a great career. So I’m rooting for him. And he certainly proved to everyone that he’s still got it in him.”