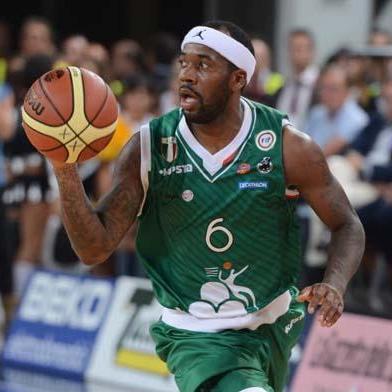 “In the future, everyone will be famous for one news-cycle” — that’s how BallinEurope would update Andy Warhol’s well-worn line for the 21st century. Until the story’s been beaten to death (and the public consciousness’ short-term fascination ends) on Friday, everyone gets a turn in the media spotlight: Honey Boo Boo, McKayla Maroney’s face, UFO landing strips in China … the list goes on.

Bobby Brown has enjoyed a nice run this week in his alloted personal media cycle to culminate in his surprising Montepaschi Siena’s game against sharp-looking BC Khimki Moscow Region tonight. Brown went viral thanks his record-tying 41-point teeing off last week against Fenerbahce Ulker, ironically the team for whom Brown’s predecessor Bo McCalebb eschewed Siena. Speculation snowballed until millions of Americans who’d forgotten the NBA journeyman of 2008-10 rediscovered the Cal State Fullerton product thanks to a piece from Yahoo Sports’ Adrian Wojnarowski, who recalled the days of 19th-century sports journalism in referring to the “Euro League”.

But for us over here in the know, Bobby’s been one of the Euroleague’s most interesting stories all season.

Brown started the season not only having to fill the shoes of the top scorer of EL 2011-12/Team FYR Macedonia miracle man McCalebb, but with a nasty reputation on The Continent for being little more than a black hole. Ten games with Asseco Prokom back in 2010 was enough to give Brown this rep, and why not? His average line of 2.7-of-7.0 shooting and a lowly 1.8 assists per EL match showed poor shot selection and little ability/desire to find the open man in a static offense.

His showing in 2010 was quite a shocker for those who’d seen his rookie pro season in Alba Berlin. In Germany, Brown had shown an effective all-around game resulting in stats of 13.8 ppg/3.7 apg/2.55 rpg: Here was the guy fans had seen at Fullerton.

So what was it? Did three years of bouncing around NBA teams unwilling to let a 6’2″ (188cm) guard drive to the hole ruin Brown’s on-ball moves and court vision?

Flash forward to 2011. The combination of a ho-hum half-year with Aris BC in which he shot under 35% overall while jacking up over five threes per game plus perhaps the realization that his career could well be in danger of bottoming out, Brown upped his game for EWE Baskets Oldenburg: This was the player we’d seen at Fullerton State.

Back in the Bundesliga, Brown managed his highest overall shooting percentage (42.3%) in his pro career; more importantly, however, Brown’s ratio of two-point to three-point attempts of 240:202 marked the sanest in his years in European and NBA ball. And the passing … in 2011-12, Brown was wizardly once again with 4.7 dishes per game.

Everything was set for a triumphant return to Euroleague to wash away the bad memories of 2010; except all but Bundesliga fanatics didn’t see it coming.

Game one of the EL regular season seemed to prove the doubters correct. Brown was a disappointing 4-of-11 with just two forgettable assists as Alba Berlin shocking the low-budget Italian side. The following game was just as disappointing for Bobby and Siena, as they lost a two-point squeaker to Maccabi. While Brown played the last six minutes of the cliffhanger, he was mostly a non-factor as David Blatt sent his troops to stifle the sure go-to guy throughout the final quarter.

So with an 0-2 hole dug in the EL (not to mention a couple losses back home in Serie A play), Brown and Siena came back. Over the next four games, Brown averaged 26.0 points and 6.0 assists per. His incredible 15 fouls drawn against Elan Chalon in week four showed an aggression and capability to break down offenses unseen since he was fighting for a job in the ‘States.

Despite a speed bump in the week eight Unicaja game, Brown has steadily risen up the Euroleague MVP trackers’ charts. Those 41 points may have been anomolous in the historical sense, the show wasn’t especially surprising in this amazing career year.
And after that explosion we’re told that “Several NBA teams have inquired about the possibility of signing him as a backup point guard” — presumably two of these would be the New Orleans Hornets and Sacramento/Seattle Kings, both (presently desperate) squads who’d had Brown on the roster at times last decade — and so will be watching tonight’s match with interest.

So what to expect?

With Montepaschi’s main weakness at the center spot (sharing time there are Luca Lechthaler, Benjamin Ortner and the strangely inconsistent Tomas Ress), Luca Banchi will certainly be looking for Brown to be driving often. Brown’s skills have been shown this season to be well-suited against the sort of interior D that Khimki brings: The Russian side is tops thus far in blocks per game but is decimal points from the bottom in fouls committed. In the last two games, Brown is an incredible 19-of-19 from the line on 17 (!) fouls drawn.

After the recent Bobby Brown show in Istanbul and the concomitant media circus, the Khimki backcourt zones will surely be keying on no. 6. And while the Russian side sure looked good in stifling a Bomba-free Barcelona last week, Khimki has shown itself to be quite vulnerable to quick guys attacking from the arc; see Bo’s 17 points on 8-of-13 two-shooting in game one; Pietro Aradori’s 13 points and four assists in game three; the whopping 37 put up by Jaycee Carroll and Rudy Fernandez in game seven.

With the hype machine working the way it does, though, anything short of, say, 25 points and a bunch of dishes will disappoint the NBA-side blogosphere. BiE believes that the majority of Brown’s points tonight will come from at charity stripe, though his season-high mark of 10 assists may be endangered. He might just rack up a 20/12 game tonight — enough to keep NBA scouts interested and Brown himself considering the European alpha dog vs. million-dollar American bench jockey argument — but BiE’d be surprised to see Bobby survive into the next media cycle.