Euroleague Bracketology: According to Twitter, the 2013 Euroleague champion will be…

Now that BallinEurope has posted this website’s Official Euroleague Bracket as well as the only truly unassailable set of predictions, BiE takes stock of a little EL Bracketology from good ol’ Twitter. What sort of conclusions may be drawn from a sample size of 30 tweets (well, 29 plus Sannti’s) hashtagged with #ELbracket? Well…

The clear popular favorites within the sample to win their quarterfinals series are CSKA Moscow (with 93% of tweets liking the Red Army), FC Barcelona and Olympiacos (each with 77% of the “vote”). Surely to no one’s surprise, fandom was divided on the Real Madrid-Maccabi matchup, with Los Blancos liked 19-11 among our group.

Of the 16 possible finals matchups, seven combinations were covered. Again unsurprising was the fact that no one was gutsy enough to gamble on Anadolu Efes Pilsen getting so far, but two brackets with Caja Laboral Baskonia hoisting the trophy were found – and after the way these guys have squeaked in to advance twice this season, who can truly scoff? A final outcome of CSKA defeating Barca was chosen by nearly 33% of those who picked a tournament winner, and 60% predicted CSKA for 2013 Euroleague champions.

And some of BallinEurope’s favorite brackets were…

● In the category of “Best Presentation of a Euroleague Bracket” which BiE just made up, the winner is JovicaTasevski. Future bracketcrafters, this is your standard.

● As one of the few who picked Maccabi Tel Aviv to make the finals, Youvalv noted that “Sadly” the Israeli side “will not win the cup. But close.” After Panathinaikos upsets Barcelona, that is. 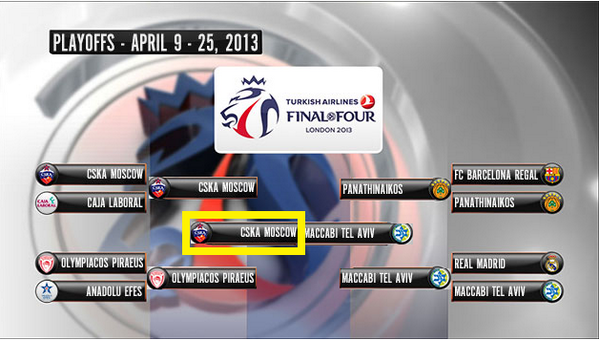 ● In “swinging for the fences,” Euroleague Adventures’ Rob Scott was another to have PAO taking out Barca, and ultimately went with CSKA for champion. (Wait a minute, can British folks use that expression? Should “fences” be “pavilion” there…?)

● And here they are: MikelFerEch and GonzakaB, they who took Baskonia to win it all: 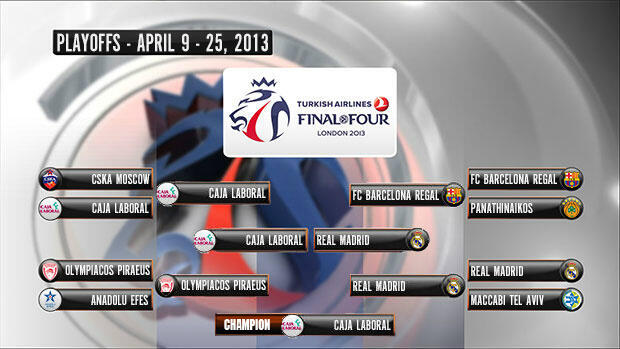 Finally, the Official BallinEurope Fearless Predictions™ have Barcelona 3-1 over Panathinaikos, with the Greens winning one on a buzzer-beater/in overtime (Caveat: Though unpublished here, BiE’s prediction for this series was published online in the form of a Taking the Charge podcast which was recorded and released well before the opening tipoff of game one – heinnews and Euroleague Adventures are my witnesses); CSKA Moscow sweeping Baskonia; Olympiacos likewise running the table against Anadolu Efes Pilsen; and Maccabi Tel Aviv outlasting Real Madrid after the full five games.

Apr 10, 2013ballineurope
Powered by Sidelines
Share on FacebookShare on TwitterShare on Google+
The one Euroleague bracket guaranteed to be 100% correctFrance’s Livio Jean-Charles leads World Team to 112-98 shootout win, first back-to-back victory since 1999 [Highlights]