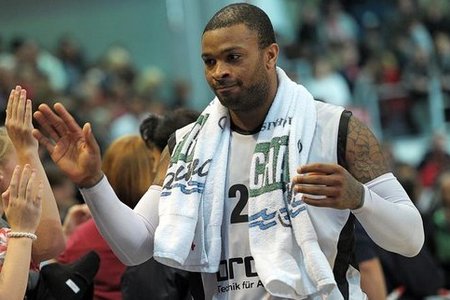 From the land of Dirk – Nowitzki and Bauermann, that is – David Hein reports on a few happenings in Germany’s top division of basketball.

Read on to find out all about Bayern Munich fining Jared Homan for getting into a bar fight; P.J. Tucker, the Dragon slayer; Skyliners winning again; and BG Göttingen’s relegation.

Jared Homan busted in Munich, continues playing
Bayern Munich have been making headlines all season – most often for good reasons. But the biggest brand in German sports had to answer legal questions after starting center – and top scorer and rebounder – Jared Homan was temporarily detained by police for his involvement in an early morning bar fight in Munich.

Police detained Homan along with two other men at 4:15am on the morning of April 3 after a fight in the Milchbar (Milk Bar) discotheque in downtown Munich. Homan was later released but the police are investigating possible assault or even grievous bodily harm cases because a broken glass was involved in the fight.

Bayern released a statement that the issue is the player’s “private matter” and that it was a mistake with club management “taking it seriously and [we] had a clarifying talk with the player,” adding that Homan had hired a lawyer for the case.

“Jared Homan apologized to the club and the team and accepts the disciplinary responsibility. The form and extent of the punishment are internal matters that will not be commented upon publicly,” stated the club.

The Munich Abendzeitung daily quoted Bayern coach Dirk Bauermann as saying, “Usually something like this results in a fine. We have rules that he did not adhere to.”

Munich did not announce any punishment and it’s clear that there will not be a suspension – pending the police findings – given that Homan played this past weekend against Telekom Baskets Bonn, a comfortable 87-69 victory and is desperately needed in Munich’s low post.

And this is hardly the first instance of trouble for Homan. His former Italian club Virtus Bologna considered releasing him in February 2011 after disputes with teammates. Last November, Bologna dispatched the center after he reportedly punched coach Alex Finelli. And the German league fined Homan Є2,750 for getting into a scuffle with opponent Beckham Wyrick during a BBL game against Bayreuth.

P.J. Tucker slays Artland Dragons; Alba, Skyliners win again
In what could be a semifinal showdown, P.J. Tucker came up with an MVP-like performance of 32 points and 13 rebounds in Brose Baskets Bamberg’ 83-68 road victory at Artland Dragons to retain a three-game lead over Alba Berlin.

Tucker’s 32 points were his second-best this season after dropping 35 on Ludwigsburg in January; his tops in rebounds in 2011-12 is the 14 he grabbed against Göttingen in mid-February.

Alba Berlin made it a dozen by beating LTI Giessen 46ers, 80-67, for their 12th straight victory and remain in second place thanks to 21 points from DaShaun Wood.

Aside from Artland, the only other team currently in the playoff position to lose on the weekend was Bonn. And Fraport Skyliners took advantage of that loss to gain ground as the Frankfurt side beat EWE Baskets Oldenburg on the road, 75-67, to move to just a half-game behind Bonn.

Skyliners have won six of their last eight, including wins over Bayern, Bamberg, Artland and Ratiopharm Ulm. But Muli Katzurin’s team suffered a home loss against Göttingen – a defeat that they hope does not cost them a post-season berth.

Göttingen going down
And from the It Was Only A Matter-of-Time Department, BG Göttingen’s fate in the second division was sealed over the weekend with a 92-65 loss at New Yorker Phantoms Braunschweig. The loss dropped Göttingen to 4-26 in last place. The lone bright spot was 21-year-old Zimbabwean international Vitalis Chikoko notching career highs of 17 points and six rebounds in the loss.

Apr 10, 2012ballineurope
Powered by Sidelines
Share on FacebookShare on Twitter
This post was published on April 10, 2012
Valencia: Another Title for Another Ex-Yugoslavian?Boston Celtics to take on Fenerbahce Ulker, Milano in October