The case for Diana Taurasi to win the ESPY

The best in women's ball: Taurasi of the Mercury...

“They give out awards for everything these days. ‘Greatest Fascist Dictator: Adolf Hitler’…” – Woody Allen, Annie Hall

What? You hadn’t heard that the annual ESPN ESPY Awards for Excellence in Sport is running tonight? Well, now you know. And while shows such as these offer little in the way of relevance – quick: Name the 2007 ESPY winner in the category of “Best Sports Team” – or spontaneous moments, BallinEurope might just tune in tonight ‘cuz BiE’s got a bone to pick.

In the category of “Best Female Athlete” this year, ESPN has nominated four: Serena Williams, Lindsey Vonn, Maya Moore and Diana Taurasi. Incredibly, Taurasi is getting just 3/1 odds at the bookmakers against Williams’ 1/2 and Vonn’s 3/1; Moore is the longshot at 7/1.

Both Williams and Taurasi have won the award in the category before: The former in 2003 and the latter in 2004, which may serve as argument enough to award the ESPY to Vonn. Unfortunately, Vonn’s nomination appears to be based essentially on one downhill run at the 2010 Winter Olympics and a Sports Illustrated photo shoot.

Now, okay, Serena had a fantastic year to be sure, with singles titles taken at the Australian Open and Wimbledon, plus doubles wins with sister Venus in the Australian, French, and U.S. Opens. Serena also moved into sixth place on the all-time champions list earlier this month.

All well and good, but the level of dominance achieved by Ms. Taurasi on her way to becoming the consensus all-time greatest women’s basketball player (though BiE fondly remembers Cheryl Miller) in 2009-10 transcended Williams’ in both individual and team play – in two full professional seasons, no less.

What kind of a 2009 WNBA season did Taurasi compile? How about taking the WNBA regular-season MVP, WNBA finals MVP on the way to a title-defending championship win by her Phoenix Mercury, and the WNBA “Peak Performer” award? Incidentally, she tipped off the 2009 season with Phoenix after having arrived from Euroleague Women championship-winning Spartak Moscow, where as league MVP she led the team with a line of 20.5 ppg/5.7 rpg.

Wikipedia notes that “Taurasi is one of only two players (the other being Cynthia Cooper), to win the season scoring title, the season MVP award, a WNBA Championship and the finals MVP in the same season. 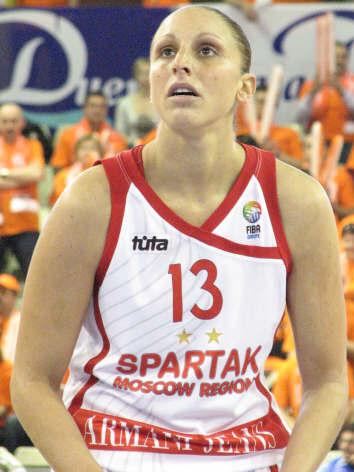 ...or Taurasi of Spartak?

And it says here that, while Cooper played 10 seasons in Italy, never did she play in WNBA ball and abroad in the same season.

So, let’s see: Taurasi has racked up seven MVP awards and has guided her teams to four championship (including the 2009 Russian Women’s Superleague title; BiE didn’t mention it…?) wins and one second-place finish (in the Russian league finals in 2010). And guess who’s leading the WNBA in scoring as we speak.

C’mon, ESPN, give it to Diana. It’s what David Stern would do…

Jul 14, 2010ballineurope
Powered by Sidelines
Share on FacebookShare on Twitter
This post was published on July 14, 2010
Rudy Fernandez: "My first choice would be to play with Barca and Rubio."Say it ain’t so, Andrei: Kirilenko says “nyet” to FIBA World Championship