He’s back! Emerging out of hiding (or perhaps digging himself out of work with youth squads plus Italian-language sports media) is BallinEurope’s man in Italy, Francesco Cappelletti. As the season progresses, Cappelletti will be opining as to what really went down in a week’s worth of Euroleague matches. Today, four key themes that will be threading their way through the 2010-11 season – and the frank take on ‘em.

Welcome back Euroleague … erm … Turkish Airlines Euroleague! Someone just said you look like the poorest edition in recent years and that your groups are less competitive than Eurocup’s, but we love you just the way you are anyway.

What do you offer for 2010-2011? Yeah, the unbeatable Regal Barcelona and the usual group of pretenders, divided between those for whom spending money is no problem even amid civil disorder (for information, phone Athens) and teams able to hide behind the justification of cycles coming to an end just to put some money away waiting for financially better times: That’s the case of Montepaschi Siena and CSKA Moscow.

Who would have figured on this? In the last seven years, these two teams have combined to collect ten Final Four appearances and two titles. But they made a definite choice by investing an important part of their budget on Simone Pianigiani and Dule Vujosevic: “Right, we can’t compete with the elite teams for elite players, so we’ll try to beat them tactically, starting off with two of today’s best five European coaches.”

Something a bit similar must be happening in Piraeus, where the inability of Panayotis Yannakis became decidedly apparent during the last Euroleague finals, and Dusan Ivkovic has taken control of the best roster of the competition in my humble opinion and, above all, on paper. My wishful thinking suggests me to say nobody can beat Barcelona, my heart hopes are open to seeing some mid-level teams thriving during the season. You want names? Okay: BC Khimki and Power Electronics Valencia. These could serve as the loose cannons of the 2010-2011 Euroleague, I swear. 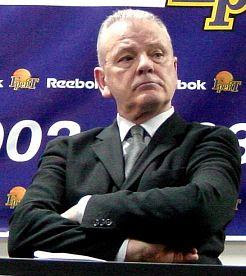 Ivkovic has the EL's most talented roster. Whatchu got?

Do you want more action? Let’s go with some scattered, useful cues to picture the competition in a more favorable light.

Is Regal FC Barcelona really unbeatable?
Think about a team that not only won last title, but also dominated the whole season. Then add Kosta Perovic. The result is a bulldozer. Xavi Pascual has at his disposal 12 players of the highest level, willing to sacrifice minutes and shots (though not Juan Carlos Navarro for sure) for the glory. The “problem” will be finding space for the five (!) big men, or in avoiding lapses in concentration, assuming the path from debut to playoffs is without obstacle.

In this scenario, pay attention to the work done on Ricky Rubio; Kobe Bryant said he’s ready for the NBA, but we don’t believe so. Development on the offensive end might fix his value in the US, however. Thanks to teammates who don’t need to be rooted, Rubio has the opportunity to step his game up and land with the Minnesota Timberwolves or someone more attractive – It all depends on him.

Bye bye, dear old champions; who’s next?
Nikola Vujcic went back to Split, Tiago Splitter finally departed for the NBA, Terrell McIntyre made Siena’s fans cry a lot, Nikola Pekovic went to Minnesota, Alan Anderson is in search of a good pro’ contract. Who can replace them? There’s a huge list of hungry youngsters on the verge to raise their standards. It’s easy to cite Jan Vesely and Nemanja Bjelica, but we prefer to note Giorgi Shermadini, Tibor Pleiss, Simas Buterlevicius, and Augusto Cesar Lima as well. For different reasons, they all have the numbers to establish themselves at the top.

Pargo: Ready to play with Sofoklis?

How much does the core count?
If we consider the last Euroleague winners, Barcelona and Panathinaikos both had a very consistent core of local players, even reuniting national team teammates. Rubio, Navarro, Fran Vazquez, Roger Grimau, Victor Sada; Dimitris Diamantidis, Vassilis Spanoulis, Kostas Tsartsaris, Fragiskos Alvertis. When CSKA Moscow put its flag at the top of European basketball, they didn’t quite do likewise, but the brotherhood among J.R. Holden (hey, he *is* Russian!), Matjaz Smodis, Theo Papaloukas, and Trajan Langdon was cut from solid bedrock.

I mean, teams like Real Madrid, Efes Pilsen Istanbul, Caja Laboral Baskonia, Montepaschi Siena, and Maccabi Electra Tel Aviv can’t get further than a playoff quarterfinal, or maybe a Final Four semifinal. It’s the story of Euroleague. Too many new faces do not make for “title now.” Neither does a me-first talented man. I’ll go all the way with the same three (Panathinaikos, Olympiacos, and Barça) plus a possible surprise.

How about rankings?
No, Os has done it so many times before. But I will point out what for me will be interesting. For example, the chemistry between Jeremy Pargo-Sofoklis Schortsianitis, the key to reading Maccabi’s season … The differences between Group A (ridiculous in toughness, with all teams potentially capable of taking the top spot or being eliminated, Group B (with two bigs and a race for the remaining two passes); Group C (dangerous for Siena with a new arrangement to prove); and Group D (the hardest, with AJ Milano a nightmare catch as a fifth seed) … Ettore Messina is convinced a shooter like Clay Tucker could settle the troubles his perimeter players have shown and keep on showing … How will Smodis return from the injury … If Emir Preldzic and Victor Claver will finally be able to attain the right mentality … Last but not least, I want to enjoy another unforgettable season by Bojan Bogdanovic and the laughter about why no one from the next floor has had the good sense to bet on him.

Oct 19, 2010ballineurope
Powered by Sidelines
Share on FacebookShare on Twitter
This post was published on October 19, 2010
Jasikevicius turns down Lietuvos Rytas offer; club to sign another PGNapoleon Dynamite’s fantasy team is better than yours