Langford: He upon whom the Boss' hopes are pinned

Hello everybody, greetings from the Euroleague Basketball headquarters! This is Javier Gancedo of Euroleague.net, in what possibly will be my last SportingBet Fantasy Challenge column this season.

If you want to keep me on the page in the fantasy off-season, make some noise! Start a riot! Go to Budapest and demonstrate in front of Os Davis’ home, wherever it is! Just kidding: It has been a pleasure to give you my impressions on the game. It has been a terrific fantasy season, after all, I just hope you enjoyed reading this column as much as I did writing it.

So the Top 16 comes to an end this week, which means the game will be over on Thursday. On one hand, I can’t complain – no more waiting until 3am to open the game after a long Euroleague/Eurocup week – but on the other hand … of course, I’ll miss it. Still, with one week to go I have a chance to win the BallinEurope Invitational Challenge private league…

I rank second (Honestly, I should be in third place, though, because Eurofootball should have won this private league but left his team open, making a terrible mistake) and am around 25 points away from Radallo, who sits in first with a score of 2,312.8. I have two options: Play conservative and finish second no matter what, or risk a lot to finish anywhere from first to sixth.

And you all already know I’m going to risk. I’m sick of being second. I was second in the previous two editions of the Ball in Europe private league. The managers change, but I keep the same spot. At least the second-ranked team got a terrific set of K1X stuff … we’ll see about this year. So like I said, I will risk a lot, what the hell, I don’t care…

First of all, I am getting rid of Ramunas Siskauskas. After all, CSKA finishes first no matter what and I think everyone has him. If he has a good game against Zalgiris – and remember, he is a former Lietuvos Rytas player – I’m doomed, but I’ll take the risk. I am also trading Milos Teodosic for the same reason: Olympiacos is first no matter what and may sit out its best players, plus Teodosic is everywhere in the game. My third trade will be Travis Watson, because Zalgiris has nothing to lose and may use a different rotation in this game, using Tadas Klimavicius and Mario Delas much more than expected. 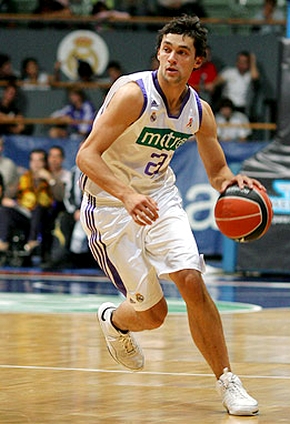 So, let’s see who we add … since I am looking for players in teams that are fighting for big goals – and especially little-used ones that can break the bank against all odds – I am going for Sergio Llull of Real Madrid. His team plays for first place and his up-tempo game is perfect to play against Maccabi.

The logical thing would be to add Linas Kleiza at shooting guard or small forward … NOT! My man will be Keith Langford of BC Khimki, as they’re playing for survival against Olympiacos in another up-tempo game. I have 137 credits for my final trade of the season. Ah, the irony … saving money all season long and now I have plenty of it. Since Panathinaikos has half of the team sidelined for the game against Maroussi, I am adding Mike Batiste: He should see his usual playing time.

So the final version of Meet the Boss in this 2009-10 fantasy season is:

Terrell McIntyre. Montepaschi is out, but I am sure it wants to please its fans with a final home win.

Sergio Llull. Welcome to the revolution: I expect Llull to play aggressive and do well against Maccabi.

Viktor Khryapa. Taking Siskauskas out was already too hard for me. Khryapa deserves to stay for good this season.

Jamont Gordon is the best player in the game right now; he isn’t going anywhere.

Alan Anderson. In good shape and playing for first place. Anderson already did well against Madrid in Tel Aviv.

Keith Langford. Again, trying to surprise people (i.e. Radallo) a bit. He should have a good game. I hope.

Robertas Javtokas. Not my favourite choice at center, but again, I gotta risk a bit.

Mike Batiste should see extended playing time with Nikola Pekovic sidelined. I expect a solid game from him.

Darjus Lavrinovic. Madrid is playing for a big goal, so Lavrinovic will be motivated to finish first.

Mirza Teletovic. With Tiago Splitter sidelined and Lior Eliyahu not 100%, Teletovic is a must against Cibona.

That’s all for me, people out there! Enjoy the final Fantasy Challenge week and focus on the competition from now on. The Euroleague season has been fantastic, but *the best is yet to come* and we all can’t wait! As for me, you will see me around on Euroleague.net and EurocupBasketball.com, no question about it. Good luck and see you soon!