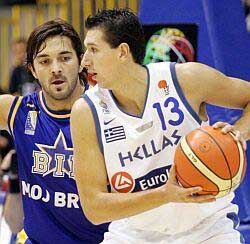 Team Greece was bounced from the 2010 FIBA World Championship by Spain last night in an improved showing from the Russia game, which had Ioannis Bourousis and Vassilis Spanoulis calling out for a little respect from the fans in the aftermath.

And now, with the Spain game (and, for Greece, the 2010 championship) history, bad news is following rapidly. Dimitris Diamantidis announced directly after the loss that he’d be retiring from the national team, effective immediately: “The game with Spain was my last,” Diamantidis declared.

The future of coach Jonas Kazlauskas with the team is also in doubt, as his contract has expired and no overtures have been made to the Lithuanian. In analyzing the tournament, Kazlauskas stated that he “saw a lot of mistakes, [and] some things we did wrong.” He went on to cite the punishments of Antonis Fotsis and Sofoklis Schortsanitis, plus the wrist injury Bourousis played through as further detriments to the team’s success in the 2010 Worlds.

Those turning to Greece’s national league hardly found solace, however, as the biggest EΣAKE story of the week was the punishment handed down to Olympiacos for its fans’ and security detail’s actions which resulted in the Reds’ forfeiture of the final game in the 2009-10 championship series, a.k.a. “The Night of Shame.”

In what can ultimately seen as both a strong judgment yet one still falling well short of appropriate penalty, Olympiacos will be forced to play its first nine home games in an empty arena and without television broadcast.

League officials also assessed the club a fine of €111,000 for insufficiently quelling the eruptions of violence that twice stopped play during the game, and for allowing fans to tote or post nationalistic and/or offensive messages in the arena.

Naturally the Olympiacos braintrust plans to appeal the decision, as, incredibly, they’d expected a penalty of just five or six empty-arena games; officials for the club described the sentence as “predatory,” since there are only 13 home games scheduled for Olympiacos.

Just as predictably (though certainly justified, thinks BiE) were complaints from rival Panathinaikos, eight-time defending champion and victim of the riot conditions on the Reds’ home floor. PAO had expected a deduction in points to be assessed Olympiacos – surely the judgment perpetual third-placers Maroussi BC were also hoping for/awaiting.

Thanks to reader Mika for the heads-up on the Olympiacos story!