Euroleague Final Four, 2011: Some trivia and factoids on this year’s tourney

As with any major sport tournament these days, the informational factoids flow freely through fandom, giving both typical fans and stat addicts extra stuff to look for in the games ahead … and who is BallinEurope to buck such a habit? Below run a few interesting milestones, achievements and straight-up trivia about the 2011 Euroleague Final Four clubs, players and coaches with which to impress your fellow enthusiasts. Enjoy! (And damn, is Derrick Sharp *really* that old…?)

• Real Madrid has played in an all-time record 14 Euroleague title games and eight titles – yet hasn’t even been to a Final Four since 1996, when some guy named Arvydas Sabonis was running things. Maccabi Tel Aviv is second in the record books, having appeared in 13 title games.

• Derrick Sharp will be playing in his seventh Final Four – all with Maccabi Tel Aviv – one ahead of Tal Burstein for most with the club. At eight, Fragiskos Alvertis, J.R. Holden and Theo Papaloukas are the only Euroleague ballers to have appeared in more Final Four tournaments than Sharp. Eight players have won four European titles previously; both Sharp and Burstein are looking to join that elite group.

• Drew Nicholas is one of just four players to have won both NCAA and the Euroleague titles (with University of Maryland in 2002 and Panathinaikos in 2009) – and with a PAO win this season, he’d be the first two-time EL champion among the bunch. The others are Tyrus Edney and Jiri Zidek (UCLA 1995, Zalgiris 1999) and Tony Delk (Kentucky 1996, Panathinaikos 2007).

• The oldest player in the Final Four: Derrick Sharp, at 39 years, 213 days as of tipoff tomorrow.

• Madrid’s Nikola Mirotic could become only the second player to win the Euroleague Rising Star award and the title in the same season. The first? Ricky Rubio, last year. 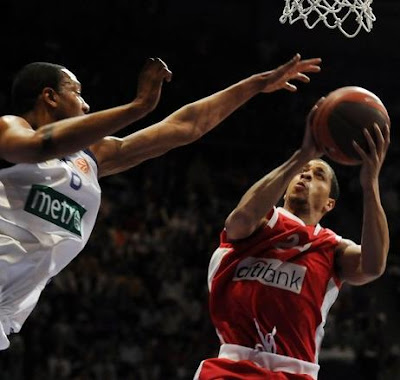 • When Jeremy Pargo steps onto the court for Maccabi Tel Aviv tomorrow, he’ll form part of half a unique distinction; he and his brother Jannero become the first American siblings to each participate in a Euroleague Final Four. Jannero played in Olympiacos’ 2009 semifinal bid.

• Real Madrid’s Sergi Vidal and Pablo Prigioni are in danger of achieving an ignominious stat. Both are in the Euroleague Final Four for the fifth time, but neither has won a title. The only other player to ever go oh-for-five as such was Andres Jimenez of FC Barcelona in the late 1980s/early 90s.

• Speaking of ignominy, Montepaschi Siena could become the first team ever to play in four EL Final Fours and not reach the championship game. The only team to take an oh-for-three in this tournament was Aris, who did it in consecutive years from 1988 to 1990.

• Siena’s Jeleel Akindele could become the first Nigerian ever to hoist the EL trophy.

• Finally, Panathinaikos coach Zeljko Obradovic can extend his incredible lead in the record books in the category of “most Euroleague titles won by a coach.” He already has seven titles to his credit with four different teams. Four – including Ettore Messina – boast four titles.

May 5, 2011ballineurope
Powered by Sidelines
Share on FacebookShare on Twitter
This post was published on May 5, 2011
Khalid El-Amin rehabbing, thinking about future, “confident” to come back with Lietuvos RytasExistence of God could be proven in Euroleague Final Four