God, please give us victories!

In advancing to the 2012 Olympic Games, Team Lithuania has written itself into the record books. BallinEurope’s Lithuanian agent Y. wants you to understand just how important this achievement is to the people of that basketball-adoring country…

“God, please give us victories. Some people don’t understand: This is all we have left. Basketball is the only thing that is keeping Lithuania together. The cheering, the singing, the same colors, all of this is what reminds me of who we are. We are a union, a family and some stupid Lithuanians make me forget that all the time. But when I look at our amazing team, who put their last efforts into winning, I cannot be happier. So God, please give us victories, all we want is to stay a country.” –L. Hasai in “And you? Are you aware of what this means for Lithuania?” the video celebrating the 2010 edition of the Lithuanian national team

Go and ask anyone who understands. It was a question of life or death for Lithuanian basketball last week in the FIBA Olympic Qualifying Tournament in Venezuela.

As soon-to-become four-time Olympian Šarūnas Jasikevičius drove past Puerto Rico’s Daniel Santiago with 31 seconds to go in the quarterfinal matchup, the country’s entire basketball chronicle flashed in the minds of every green-and-white fan. Lithuania, down one, was perhaps one failed possession away from losing an opportunity to reach London 2012.

“We wanted to get a quick shot to utilize the two possessions left in the game,” Jasikevičius said after the game, admitting he hadn’t gotten a great look. 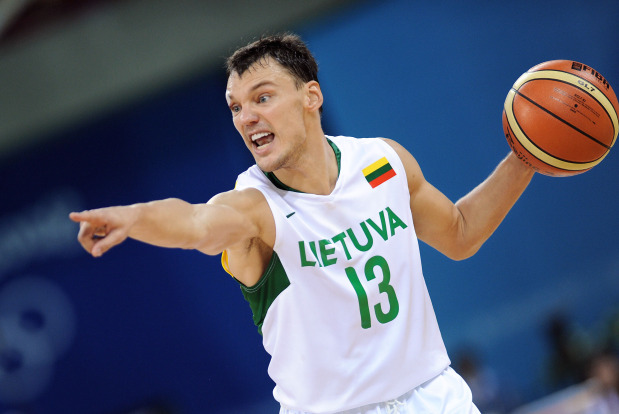 Saras: The hero once again

It was like a cliché moment from an action movie, in which the souls of fallen heroes rise for one short moment to put the protagonist over the top. With history of five straight Olympics on his shoulders, Šaras was not to be denied. The ball went over Santiago, bounced off the glass and into the basket. Thirty seconds of ball game later, Lithuania had prevailed.

It was not the first time the Greens slipped past an opponent on the road to Olympics. A loss against Germany in the last game of the second group stage in Eurobasket 2011 would have sent them packing. The match went to crunch time but Lietuva managed to come through victorious. Later, a narrow defeat of Slovenia in a classification game on a three by Mantas Kalnietis earned Lithuania a place in Caracas.

Now, with so much less to go, the team was not going to throw its chance away. The last game in Venezuela was not as nearly as nerve-racking: Lithuania flew by Team Dominican Republic in a 109-83 rout to book a ticket to London.

Lithuanian basketball survived – and continued making history. No European team, other than the Soviet Union and Yugoslavia, has ever made it to six straight Olympic Games. The only two in the world to do so since 1992: the United States and Australia.

Y. is BallinEurope’s ace-in-the-hole, the man-in-the-know in hoops-mad Lithuania. Though a sporadic contributor to the website, Y.’s straight dope, input sharp opinion and tales of Mad Vlad are invaluable to BiE.

Jul 9, 2012ballineurope
Powered by Sidelines
Share on FacebookShare on TwitterShare on Google+
Upset in the FIBA Olympic Qualifying Tournament today: What are the chances?Vlado Ilievski: FIBA partly to blame for FYR Macedonia defeat