Greek, Serbian suspensions handed down by FIBA: Krstic out for three Worlds games 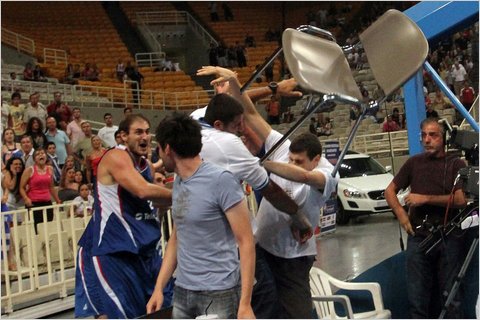 It’s official: Suspensions from the 2010 FIBA World Championship have been handed out as a result of Greece-Serbia brawl last Thursday; Team Serbia’s Nenad Krstic will be missing the first three games of the tournament (against Angola, Germany and Jordan, respectively) while teammate Milos Teodosic got a two-game suspension.

FIBA, the world governing body of basketball, today announced that four players are to be suspended, and their national federations fined, after recent fighting at a friendly tournament in Greece.

On 19th August, at a game between Greece and Serbia, a fight broke out towards the end of the game involving two players: Antonis Fotsis and Milos Teodosic. This resulted in a wider, violent brawl between several players of both teams.

The game was stopped immediately and never resumed.

FIBA started an official investigation after the game and has now announced its findings.

Serbian player Nenad Krstic is suspended with immediate effect for three games in main official FIBA competition which include the World Championships, Olympics and Continental Championships. The player was also fined a total of CHF 45,000 (almost €34,000/$44,000).

His teammate, Milos Teodosic, is also suspended with immediate effect for two games in main official FIBA competitions. The Serbian Basketball federation will be fined a total of CHF 20,000 (€15,375/$19,500).

Greek players Antonis Fotsis and Sofoklis Schortsanitis are suspended with immediate effect for two games in main official FIBA competitions. The Hellenic Basketball Federation will be fined a total of CHF 20,000.

Money from the fines will be used to support education programs for young basketball players.

FIBA believes that the judgment will send a strong message to all players that their behaviour on and off the court must be exemplary and in line with the rules of basketball at all times.

All parties have the right to appeal the decisions taken.

The FIBA World Championship begins in Turkey on August 28th, 2010.