Kobe Bryant: “I would love to play in Italy” 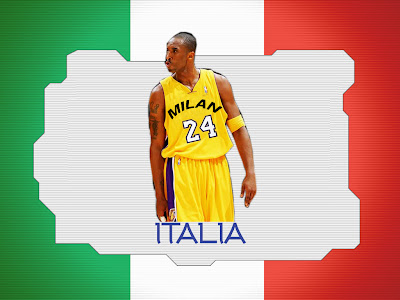 It’s a dream dreamt by every follower of Italian basketball, not to mention all of us refugees of Los Angeles Lakers fandom in Europe: the fantasy that longtime Northern Italy resident Kobe Bryant might one day play some Serie A ball before hanging it up.

Well, today, Italy-based La Repubblica made that fantastical dream seem just a bit closer to reality. In a piece running on the sports page, Kobe gave the depressed journalists covering the World Cup some bon mots to run with today.

“Yes, I would love to end my career in Italy. I have a lot of friends in Emilio [a region in northern Italy] and Milan.”

Kobe went on to state that such an occurrence wouldn’t happen anytime soon (to be sure), but did describe the possibility as a “dream.”

Now, while this sort of speculation about Kobe-to-Italy does tend to come up every couple of years these days and Bryant has recently signed a nice long contract with the Lakers, this seems quite on the realistic side.

(Incidentally, here’s a representative quote from the maybe-Kobe-to-Italy rumor mill of (pre-Lakers championships sans Shaq) 2008: “I’d go. I’d probably go. Like [to] Milan or something like that, where I grew up or something like that? Peace out. Do you know any reasonable person that would turn down [$50 million]?”)

BallinEurope has figured for a while that we’ll be seeing 38-year-old Kobe playing European ball in time for the 2016-17 season – after he’s shattered most of the numbers in the NBA, he’ll have to outdo the damage Arydas Sabonis did for Žalgiris at 39.

Italian reporters caught up with Bryant in Johannesburg, where both parties commiserated about Team Italia getting bounced nice ‘n’ early from World Cup 2010; check out the Italian-league article to see Bryant nattily attired in the Team USA jersey. After reminiscing a bit about Marco Van Basten, Diego Maradona and Roberto Baggio, Kobe was forced to get down to brass tacks about football, namely who’s gonna hoist the Cup?

Kobe stated that, whilst a month ago, he was Germany all the way, now he’s wavering behind Brazil and Spain. (“Un mese fa dicevo Germania – ha risposto – ora non so, comunque mi piacciono Spagna e Brasile.”) It must be noted that this was before the Mamba attended the Chile-Spain game and before Germany doled out a right punishment to England on Sunday afternoon.

Kobe’s father Joe “Jellybean” Bryant played with Italian League teams while Kobe was between the ages of six and 13 years old.