On Hezonja, Todorovic plus a couple of Swedes: FC Barcelona’s future as bright as the present? 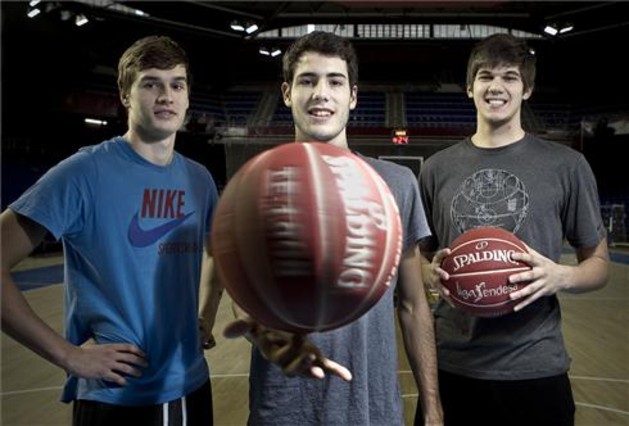 As though FC Barcelona’s red-hot play – they’re now at 14-4 overall after an 0-2 start in Spain – weren’t enough to keep European basketball devotees watching, here are two more reasons for you: Mario Hezonja and Marko Todorović.

At just 17 years old and despite missing the entire 2011-12 regular season, Hezonja finally got a taste of the action in Barça’s 78-48 laugher over Beşiktaş in Turkey last Friday night. His Euroleague debut stat line read five points, two rebounds and one steal in a few ticks under 12 minutes of play.

Hezonja again did not play in Spain this weekend, unlisted on the roster for Barca’s 81-64 win over Cajasol in Liga Endesa play; the 12th-man spot was filled by 20-year-old Todorović of Montenegro. In the Beşiktaş game, Todorović’s 12 minutes of court time was the most he’s gotten all season and the national teamer was good for four points, four rebounds and two blocks.

Potentially the nucleus of a shiny new Barca frontcourt? Perhaps, perhaps not. On the plus side for Barcelona backers – and a minus for, say, Wizards Nation – is Hezonja’s hefty seven-year deal which could keep him with the club through 2018-19. In contrast, The Bible, a.k.a. DraftExpress, sees Hezonja entering the NBA as a lottery pick in 2014, thereby prompting the question “How do you say ‘Welcome to Washington’ in Croatian?”

In the U16 Youth Championship tournament of 2011, Hezonja bagged MVP honors for his all-around performance of 20.0 points, 8.2 rebounds, 2.7 assists and 2.2 steals per game as Team Croatia took the gold – and Hezonja was perhaps inevitably hung with the nickname “Super Mario.”

After recovering from an apparently pretty serious bout with mononucleosis, Hezonja looked as though he’d been secretly working on his game for the FIBA U17 World Championship, helping Croatia land a bronze with 20.8 points, 7.0 rebounds and 2.25 steals per game, culminating in a 23-point, eight-board, three-steal effort against Team Spain.

In the short term, Hezonja may be getting groomed to step into 34-year-old Pete Mickael’s slot. Such a move would likely represent a move up in ball handling, but quite a comedown at present in terms of defensive ability. Replacing a defensive MVP-level talent such as Mickael won’t be easy no matter who eventually suits up there, but BiE loves what Ante Tomic (just 24) has done in stretching the floor while giving Erazem Lorbek and Mickael both better opportunities and rest.

Interestingly, FC Barcelona is opting to give Todorović much more quality time in the big league rather than in Liga Endesa thus far: He’s averaging just over one minute per game in Spain, while getting over 6½ minutes per in EL play. Is team management hoping to give the young Montenegrin a crash course or showing off his skills in an attempt to entice an NBA draft pick and thus a nice buyout? Or both? (After Barça’s game against the Dallas Mavericks on the NBA Europe Tour, Todorovic certainly rose on a few scouts’ wish lists…)

In a time when internationalism and financial realities are harming-to-mortally-wounding formally dominant European franchises, e.g. Cibona Zagreb, Montepaschi Siena, etc., Barcelona Regal’s future looks as bright as ever – even if the club is developing quite a bit of non-homegrown talent. Aside from Hezonja and Todorović, the youth team is bringing along Swedes Nick Spires and Marcus Eriksson plus Bosnia & Herzegovia wunderkind Nedim Djedovic. It seems the Blaugrana won’t be going away for some time…

Dec 3, 2012ballineurope
Powered by Sidelines
Share on FacebookShare on TwitterShare on Google+
Poll: Which player in Europe should be in the BallinEurope logo?Podcast: Interviews with Ettore Messina, Viktor Khryapa; ruminations on, well, a lotta stuff