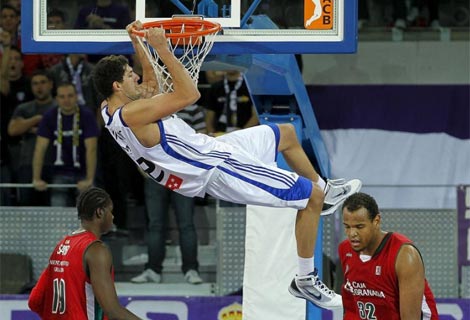 Mirotic: "not so attracted to NBA"

Despite his impressive performance at the FIBA U20 European Championship and a nice 14-point seven-rebound performance in the 2010 Nike Hoop Summit game, Nikola Mirotic hasn’t fully captured the imagination of international basketball media types until just about three months ago with Real Madrid. In was in week 13 of the ACB when then coach-Ettore Messina began consistently giving minutes to the 20-year-old at a tune of nearly 22 minutes a game since.

With the apex of his 2010-11 reached just this weekend in an eked-out victory over Power Electronics Valencia in the Euroleague playoffs – 11 points, including his team’s last five and the game-winner – Mirotic is causing some speculation as to playing for Team Spain in Eurobasket 2011 and getting drafted into the NBA.

From FIBA first comes some gushiness from Real Madrid captain/Team Spain member Felipe Reyes: “‘We are playing important games that are going down to the wire and players like Mirotic are crucial in those minutes…

“A player that can’t stay out of the headlines in Madrid is Mirotic, an all-tournament team selection at last year’s U20 European Championship while representing Spain.

“The forward excelled in the Top 16 when given a chance to be a big contributor by Messina and on Tuesday night against Power Electronics Valencia in Game 1 of their Euroleague Quarter-Final tie, he scored seven of his 11 points in the fourth quarter.

“His biggest baskets came when nailing a jump shot to give Madrid a 66-65 lead and the next trip down the floor, Mirotic buried a three-pointer from the left corner.

“The performances are giving him a chance to make Spain’s EuroBasket squad at the tender age of 20.”

And the hype has extended to Mirotic’s possible draft selection in 2011 as well: “Born in Montenegro but a naturalized Spaniard that could make the national team this summer and play at the EuroBasket, Mirotic could find himself in the NBA one day.

“‘The likelihood is that I will enter the next draft, although I want to remain here as long as possible,’ he said.

“‘I like the NBA, but perhaps I’m not attracted to it as much as other youngsters.’

“Mirotic averaged 15.3 points and 6.8 rebounds per game last summer for Spain at the U20 European Championship, leading the country to a bronze medal.”