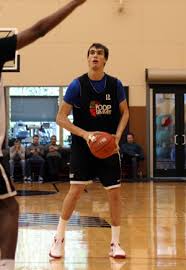 For just the fourth time in 15 years, Team USA lost the marquee match at the Nike Hoop Summit to the World Select squad. Dario Saric, a.k.a. The Next Big Thing coming out of Croatia, put in a double-double of 13 points and 14 rebounds in the World’s 84-75 win, with the latter mark tying the record currently also held by Dirk Nowitzki, Milan Macvan and Nemanja Aleksandrov.

In a post-game interview with the NBA Draft Insider, Saric agrees that he might best serve as a “point forward” – after all, the smooth ball-handling Croatian enjoys the playmaker position best but he’s just a bit too tall. On the other hand, Saric lists his role model as Magic Johnson…

Also of Euro-centric note: Enes Kanter’s record-setting mark of 2008 was topped by the USA’s power forward Shabazz Muhammad, who was good for 35 points … Vytenis Cizauskas of Lithuania saw some quality time and grabbed five rebounds.

The entire game – including warmups and post-game press conferences – may be found on the YouTube channel of Net Scouts Basketball; quarter one, part one runs below to get you started. Official FIBA writeup of the game follows the video.

The World team overcame a record 35 points and nine rebounds by USA power forward Shabazz Muhammad to beat the American team for the first time since 2009. The U.S. still leads the all-time series with an 11-4 record.

“Wow, special win for us, for the World Team. I know it hasn’t happened too often, so anytime you get a win over the USA it’s a good feeling,” said World Team head coach Roy Rana of Canada.

Rana had plenty of help from his pair of Canadian players Wiggins and Bennett – the trio joining forces again after winning bronze at the inaugural U17 Worlds in 2010. Wiggins scored a team-high 20 points, grabbed seven rebounds and blocked two shots, while Bennett collected 7 points and 11 rebounds.

Bennett may have also scored the biggest basket of the game in the fourth quarter with the World Team leading 78-75. He got his hands on a long rebound from a blocked shot and with the shot clock winding down hit a high three-pointer over the outstretched arm of American Nerlens Noel, one of the best shot blockers in the U.S., with 22 seconds left to play.

“It was in the moment. I caught the ball, and I saw Nerlins coming at me and I know he’s a shot blocker, so I tried to get it up high. So I just threw it, and as soon as it left off my hand I knew it was good,” said Bennett, whose shot helped the World Team finish the game on a 10-0 run for the victory.

Wang Zhelin, who played at both the 2010 U17 and 2011 FIBA U19 World Championship for China, added 19 points, eight rebounds and two blocked shots. And Saric, who played at those same youth world tournaments, collected 13 points, 14 rebounds and five assists in the win.

Argentina’s Marcos Delia, who played at the 2011 U19 FIBA World Championship, came off the bench for four points and seven rebounds while U19s champ Team Lithuania’s Vytenis Cizauskas chipped in two points and five rebounds.

In total, the World Team out-rebounded the United States 57-34 but committed 23 turnovers to just 12 for the USA, which shot only 36 percent for the game.

“I wasn’t really aware of (the scoring record). I just thought my shot was going in tonight. I thought we really played well in the second half with the rotations on defense. If we would have done that in the first half, we would have come closer to winning the game,” said Muhammad, who added nine rebounds.

The Americans trailed 52-34 at halftime but fought back to take their first and only lead of the game at 75-74 with 3:20 left to play.

Tony Parker, the only American player with experience at the FIBA level – winning gold at the 2010 U17 Worlds – went scoreless in eight minutes.

Apr 10, 2012ballineurope
Powered by Sidelines
Share on FacebookShare on TwitterShare on Google+
Upsets galore as underdogs steal home court advantage in Austrian playoffsValencia: Another Title for Another Ex-Yugoslavian?