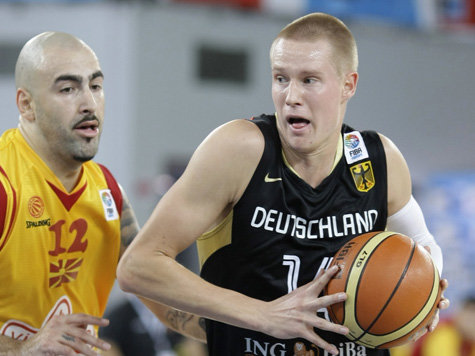 Add another name to the ever-burgeoning list of quality European players who will *not* be considered for selection in the 2010 NBA Draft: Team Germany/Ratiopharm Ulm forward Robin Benzing.

David Hein of Germany-based heinnews is reporting that the 21-year-old Bundesliga sensation pulled himself from contention in 2010 because Benzing “would most likely have been drafted but not likely in the first round, meaning he would have spent the next one, two seasons in Germany or Europe anyhow.”

For those of you keeping score at home, the non-draftees list for Europe now includes the following by BallinEurope’s reckoning: Benzing, Donatas Motiejunas, Jan Vesely, and Tibor Pleiss.

Still in from The Continent as of now are Nemanja Bjelica, Miroslav Raduljica and the prospering Ryan Richards. No definitive word as yet on the injured Kevin Seraphin, but apparently the Frenchman hasn’t backed out.

That 2011 NBA Draft is looking better for European players all the time, eh? Meanwhile, Europe will be playing host to quite an impressive collection of young talent next season – and in 2010-11, European basketball should be sporting quite the bumper crop.