From Zen Master to Euroleague Master in Los Angeles? 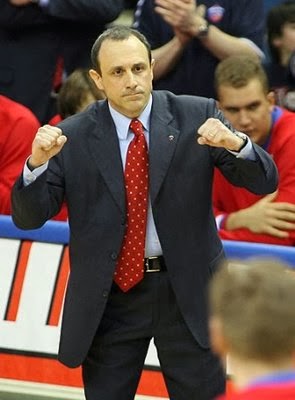 Whoa, well now. Los Angeles Lakers fans knew that life would be bizarre in the post-Phil Jackson world, but so immediately? And involving Ettore Messina, for Naismith’s sake?

HoopsWorld reported last night (this morning by CET standards) that the four-time Euroleague champion coach might be coming aboard to serve under intriguing non-Kobe approved incumbent Mike Brown. This would appear to be a logical choice by Messina who, back in March, mused that assistant-coaching in the NBA “would be interesting.”

In talking to CNNSI shortly after abruptly parting ways with Real Madrid despite leading the team to nice positions on the ACB and Euroleague tables, Messina qualified his remarks with “But I need first of all to see if I could be a good assistant after many years of not being an assistant. And then it would have to be made clear that I am not going there to steal anybody’s job.”

Messina has been thought to be a candidate for a job with the San Antonio Spurs for 2011-12 as well, having spent eight days with that club in late March; Italy-based SoloBasket speculated that Messina would be offered a position when unnamed Spurs officials met with the coach during the Euroleague Final Four.

For those not necessarily in know on European basketball, here’s the Twitterish-length bio on Messina: Two Euroleague titles each with Virtus Bologna (1998, 2001) and CSKA Moscow (2006, 2008); head coach since 1989, also leading Benetton Treviso and Madrid in his career.

And from 2008, here’s Messina schooling (literally) folks in Toronto on post play.

May 26, 2011ballineurope
Powered by Sidelines
Share on FacebookShare on TwitterShare on Google+
New Zealand’s Abercrombie says “no” to Europe, Penney “maybe” Dirk, Dydek and beyond: Weekend video clips