The NBA fan’s nightmare came to pass yesterday with the expiration of the league’s collective bargaining agreement with the players, the concomitant announcement of a player lockout, and fresh new fear that professional basketball in 2011-12 might not even happen in the ‘States.

BallinEurope’s gut reaction, at least on a visceral Eurocentric level? Cool! Bring on the empty stadiums and bring in the players to Europe! Whisperings since 2010-11 tipped off had some top clubs claiming to be stockpiling cash for NBA players should the lockout happen; combine this awareness with the desire for some of these guys to, you know, just *play* somewhere, America’s loss could truly prove to be The Continent’s gain – at least after the 2011 FIBA Eurobasket tournament, for which, not so incidentally, the NBA may also have a profoundly negative affect.

During this offseason, BiE will definitely have one eye on the NBA lockout, passing on news and speculation regarding NBA players to (and, in some cases, back to, Europe). In all seriousness, while it would be a shame to see an entire season fall by the wayside (and brutal to see another 50-game season, though BiE’d certainly bet the Miami Heat couldn’t take a title in such circumstances), a year in which the indisputably top professional basketball was being played in the Euroleague would be, basically, awesome.

Yesterday, writer John McMullen of The Sports Network concluded that “Europe is no panacea for locked out NBA players” in a look toward The Continent. CSKA Moscow addition Nenad Krstic is quoted heavily in the piece after a Boston Herald story, with the key lines going as follows.

“I don’t think you will see a lot [of NBA players] coming here … Europe is not in a great situation financially. There are only four or five teams now that can offer much to NBA players, and those teams right now are almost full.”

Here’s to guessing Krstic’s four or five might be FC Barcelona, Real Madrid, CSKA, Efes Pilsen and Fenerbahçe Ülker … maybe…? However, outside the Red Army, few of these rosters appear “almost full.” Hmmm…

But perhaps a sheer cash outlay isn’t the point for some. In recent NBA times, some veteran players – a few not even named “Shaquille O’Neal” – have shown the willingness to shed a few million off the contract for a chance at a ring. In the post-2011 lockout world, the willingness of NBA players to come to Europe for the upcoming season depends on their seriousness to stay fit and/or national pride. And possible a chance at a triple crown somewhere. 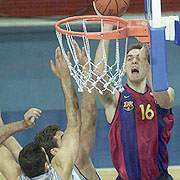 A pair of top European NBA players are being heavily speculated about and both seem to be weighing their options for 2011-12: Pau Gasol and Dirk Nowitzki. TalkBasket quotes Gasol, after Spain-based television network TVE, as stating that “I have thought about playing in Spain but it would be difficult. Playing for just a few months would be unfair to the team that has to take a gamble and invest in me.

“But I know I don’t want to have [and empty] year if the season is suspended, something that would seem very strange to me, given that the NBA is in a good period.”

You know who’s enjoying some schadenfreude and slightly salivating in anticipation of a cancelled 2011-12 NBA season? FC Barcelona fans. Gasol has clearly had a 2011-12 season in Barcelona in mind for some time, having stated in a Marca.com interview in May that “Barcelona would be my first option…”

And then there’s Nowitzki. Since February or so, three German clubs have been thought to be in the running to land the big Maverick in case of this lockout: Alba Berlin, just-promoted Bayern München, and 2011 BBL champions/2011-12 Euroleague contender Brose Baskets Bamberg.

With Alba Berlin not guaranteed to play in the big league in the upcoming season, this would empirically seem to be a dead option; however, the always-excellent Germany-based heinnews has Bayern president Uli Hoeness stating yesterday that “We could get [a Nowitzki contract] done.”

Hoeness is being quite conservative publicly any such giddy notions, though: “…the signing of German superstar and NBA champion Dirk Nowitzki is not really an issue at the moment. ‘That is not planable. We don’t need to talk about unlaid eggs,’ said the Bayern boss, who added, ‘Naturally we would very much like to see Dirk here. And if we had the opportunity we would also get it done.’”

Finally, a Britain-based website sees much darker and more expensive implications of the NBA lockout for international ‘ball, based on … insurance policies.

According to the MVP magazine website, the lockout temporarily suspends a compact between FIBA and NBA with regard to insuring against career-ending injuries. National organizations from all over Europe will have to provide this money for their NBA-associated national players.

For Team Britain, this is crucial, with key members Luol Deng and Ben Gordon now needing this coverage. MVP notes that in 2008, Deng alone cost British Basketball some £272,000 (approximately €354,550/$540,000) and, according to the ‘site, “British Basketball performance director Chris Spice admitted that the governing body has now begun its quest to ensure the pair are cleared to play.

“‘We’re trying to secure insurance coverage,’ Spice revealed. ‘FIBA Europe has also looked into it on behalf of all the nations who have NBA players. We’ve look at their coverage as well as taking one out independently. The issue is that we have two players. The thing now is that we’re taking to insurers about what the conditions would be to bring the premiums down.’”

Jul 2, 2011ballineurope
Powered by Sidelines
Share on FacebookShare on TwitterShare on Google+
D(irk) Day in Germany: Footage from Nowitzki’s homecoming in WürzburgJaka Lakovic signs with Galatasaray Café Crown (who oughta be in Euroleague...)