Marcus Brown is Today the toast of Kaunas...

Now Žalgiris Kaunas is truly entering into uncharted waters. After canning Darius Maskoliunas earlier this week and watching assistant coach Gvidonas Markevičius stomp out of the organization thereafter, Žalgiris owner Vladimir Romanov sent his team into game four of the Lithuanian national league (LKL) championship series headless – unless you count those two guys looking like assistants to the assistant coach who spent most of the game holding papers and bouncing around excitedly on the sidelines.

It’s unfortunate all those American TV broadcasters who love to wax enthusiastic about “fundamental basketball” (you know who you are) weren’t watching LKL Championship Game Four last night. For wont of a more complex plan, the Greens deployed a simple zone throughout the game combined with some nice full-court pressure early on. Though Žalgiris’ shooting in the first quarter was a bit shaky, the home team nevertheless went to the bench with a 20-16 lead.

Whatever Marcus Brown – ostensibly Žalgiris’ interim player-coach – said in the huddle after the first was absolutely key. If this guy indeed has dreams of guiding a professional team, all he’ll need to do in the short-term future is point to the first two minutes of quarter number two, game four. Martynas Pocius entered the game to sink a couple key baskets early on, giving Kaunas what would be an insurmountable eight-point lead.

With the 13th man factor in full effect (see video below for the view from the stands) the standing-room-only Kaunas crowd of 5,000 did their best Pionir impression so as to help keep the boiling brain in Lietuvos Rytas coach Rimas Kurtinaitis’ skull simmering.

Down by double figures midway through the second, L. Rytas began jacking up long jumpers and threes, a situation Žalgiris was happy to perpetuate, as L. Rytas remained cold early and often from beyond the arc: Ultimately, the team was 3-of-16 on threes.

With this stubborn game plan in place after about 15 minutes of play, Žalgiris was totally able to exploit its key advantage – more skilled players in the backcourt – over their rivals, coach or no. Brown (or whoever) went with a starting lineup which included Travis Watson, Dainius Salenga and Tadas Klimavičius alongside himself and Mantas Kalnietis. The Watson/Salenga/Klimavičius accounted for a combined 18 defensive rebounds and were absolutely crucial down the stretch in gathering all key rebounds to seal the game. 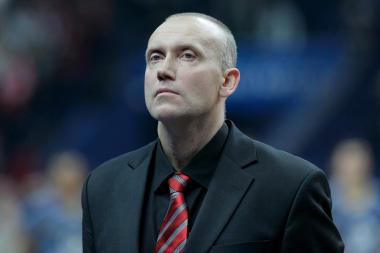 And while the Žalgiris defense was straight-up textbook, the offense was full of flair, characterized by flashy passing and Brown’s unerring sense of timing with a half-dozen highlight-reel steals and threes. Žalgiris won bettered the opposition in turnovers (with 13 giveaways against Lietuvos Rytas’ 18) and steals (8-7); while fouling well more often (L. Rytas took 31 free throws against just 23 for Žalgiris), Žalgiris was able to absorb these marrings as long as they kept L. Rytas out of the slow halfcourt game.

Kurtinaitis knew this, too, and brought his team out after half with an ugly 13-point deficit looming on the scoreboard. With a turtle-slow tempo induced, Lietuvos Rytas was able to coolly reduce it to 41-34 with a slick-looking six-point run. However, Brown zapped crowd and Kaunas back to roaring life with a smooth 12-foot jumper and Žalgiris was off to the races again.

As Kurtinaitis slowly became more and more apoplectic on the sidelines – just imagine being outcoached by, well, nobody, while you’re getting schooled by permutations out of Sidney Deane’s playbook – Kaunas ran the numbed L. Rytas into the ground in the second half, simply by employing the same old strategy you always get from an undermanned and/or uncoached team: Continuous substitution and deep rotation.

Despite going for a game-high 17 points (and instantly becoming the stuff of legend in Lithuania, certainly), P/C Brown played only 25 minutes. Klimavičius and Malnietis – both nearly invisible in the box score after Malnietis’ four assists – played 29 minutes each to lead the team. In the end, only one Žalgiris player took a DNP for the game, and 10 players logged 11.5 minutes or more of floor time.

The highlight of the game? Brown, in uniform on the sidelines with four minutes to play and Lietuvos Rytas mounting its last-ditch last-gasp comeback, hastily diagramming on the clipboard as Kaunas’ cries of delight filled the arena.

When all was said and done, the scoreboard read 83-70 to Žalgiris and the LKL Championship series in now tied at two games apiece. In the post-game, Kurtinaitis somehow restrained himself from teeing off in a Basil Fawltyesque manner at the sheer unfairness the Basketball Gods had visited upon him for Their amusement, when it was so patently obvious that Romanov was the true sinner to be punished for his crimes against The Game.

“I commend the men of Žalgiris,” said Kurtinaitis. “We had no chance of winning today.”

BallinEurope may have a new favorite team … sorry, the Los Angeles Who?

Game five of the LKL Championship series tips off at 6.10 CET in Vilnius on Monday. No word on whether Romanov will actually name a coach for the game. (Geez, why would he, right? I mean, Žalgiris is now 1-0 in the playoffs without a coach.)

May 14, 2010ballineurope
Powered by Sidelines
Share on FacebookShare on Twitter
This post was published on May 14, 2010
Childress' choice: Atlanta Hawks to make qualifying offerTony Parker on FIBA Worlds: "Non"