I’ve been waiting to talk trash to my NBA-supremacist friends ever since the announcement in April of an imminent deal between free agent Allen Iverson and Olympiacos: Ha! That’s what you get for trying to make a Hall of Fame stud sit on the bench for some second-rank team in the ‘States! Think Europe’s top teams can’t play the financial ballgame with the US? Think again! And you know what? A.I. is just the first in what’s gonna be a wave of Hall of Fame-level players jumping the ocean in the ‘10s. I mean, you know Kobe’ll end up playing/coaching/GMing for Olimpia Milano before it’s over, and it’s a matter of time before some player in his prime decides to give a Barcelona or Moscow a try … it’s multinationalism, baby! 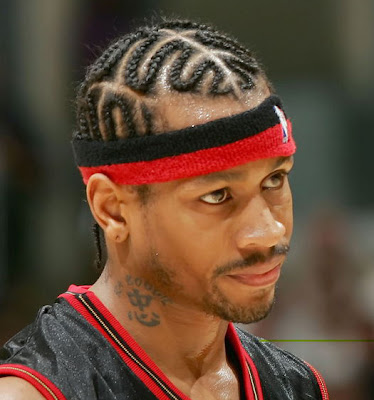 This look will soon be all the rage in Russia.

All right, all right, so Iverson-to-Olympiacos was hardly a done deal. But, um, here, look: Marc Stein mentions “Europe” – and Olympiacos specifically – as the no. 3 potential destination for The Answer. (Since since positions no. 1 and 2 are held by the now-spurned Memphis Grizzlies and the Los Angeles Clippers, always a brilliant negotiator, might not the Angelopoulos brothers be considering inking up a contract draft?) And here’s some high-level speculation … and, and … here’s a comment about Olympiacos on Iverson’s semi-official fan site.

So imagine my disappointment when i read this tragic (and absurd, really) news.

Wishful thinking, I know, but pondering how the typical Iverson boxscore line – say 8-for-25 shooting from the floor to go with 10-for-12 at the line for 29 points – would translate in the shorter European game simply made me giddy with excitement. Not to mention the possibility of teaming him with Childress and watching the duo first take control of Olympiacos on the floor, then proceed to cut through Greek and Euroleague competition while Ioannis Bourousis destroys rebounding records weekly.

Seriously, Monsieur Iverson, if you and/or your agent is reading this, we as a continent would ask you to consider jumping the puddle for the following reasons, among many many others.

• It’s a fresh start. Admit it, Answer: You and just about every other basketballer not named Shaquille O’Neal wishes more often than you admit that you could start all over again. Well, playing in Europe won’t regenerate your body, but it does give you a clean page with which to write a new chapter. After things with the Denver Nuggets and Detroit Pistons kind of blew up, this would be a swell time to begin anew.

• It’s an image redo. Over there in America, you never really got the love you deserved, despite the fact that you gave up the body night after night, typically playing hard even in lost-cause games. But in several European countries, you could inspire a generation of youngsters and probably, what, double your hardcore fanbase? Imagine the endorsement opportunities for “Die Antwort” here and back in the ‘States, the way you might parlay a couple of Spanish phrases into an entire international Nike, Gatorade, or McDonald’s advertising campaign. It’s multinationalism, baby!

• They won’t be able to answer the Answer. Okay, so no one’s been intimidated by the fearless out-of-control American crashing the paint since Team Croatia absorbed the Dream Team’s punishment in the ’92 Olympics, but this continent has never seen the likes of you, A.I. You need to bring that hard-won streetball game to Europe, if only to see the immediate reaction. So Shaq’s the Big Socrates – big deal. You could be the American Basketball Socrates, corrupting the youth of Europe with a whole new philosophy…

• Dude, you would start. Supposedly, though willing to pay out big money on a single-season contract, the Clippers are inflexible about the whole starting thing. Allen, Allen, Allen – Flex the short-term memory a little and recall how that went with Detroit last season. You don’t want that again, especially for a perpetual loser, do you? Well, do you?

• Think of no. 1 overall draft pick Blake Griffin’s career. Check out Wikipedia.org for “Kwame Brown” to get what i’m saying here.

• You’re not a comedian. Look, everyone who follows basketball is hoping that you sign with the other Los Angeles team strictly to see the NBA’s baddest player teamed up with the NBA’s worst coach, if only to dig on ESPN.com writer/Clipper season ticket-holder Bill Simmons’ daily rants about the latest battles between “Dumbleavy” and Iverson-and-Griffin and Baron Davis and god knows who else. But you don’t want that, do you?

• If we’re talking Olympiacos specifically, please remember that the Angelopoulos boys are not only generous, they’re also shrewd. Think Donald Sterling knows how to throw the big bucks because he wants to give you six-plus million a year? Hah! The Angelopouloses gave that to Childress last season and, unlike Donald Sterling, are actually committed to Olympiacos winning and winning big. The Clippers, meanwhile … ah, you know the rest.

• Greece is the place to be right now. Sure, your agent is seductively whispering to you about Los Angeles, an American basketball epicenter for decades now, but that L.A. mystique somehow completely avoids gracing the City of Angels’ second franchise at all. Greece, meanwhile, is enjoying something a basketball Renaissance at present, both in terms of youth output and international competition. Forget Boston and Indiana, forget nowheresvilles like Memphis and Washington. Forget the ‘States altogether: Think Athens, A.I. You could spice the Greek game forever, thereby achieving basketball immortality in two countries.

Imagine Allen “The Greek God” Iverson for a little while, and we’ll meet you at the airport whenever you arrive.