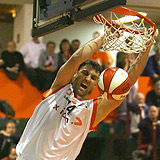 In Austria today will be held what is certainly Europe’s latest all-star festivities; indeed, the Bundesliga playoffs begin on Sunday. BallinEurope contributing writer David Hein updates us on the playoff picture and well as a rundown on all-star event participants.

The 2011 finalists Allianz Swans Gmunden have secured home-court advantage over the course of the Austrian Admiral Bundesliga playoffs while defending champions Oberwart Gunners must steal a road game in their best-of-five showdown with fourth-seeded WBC Raiffeisen Wels.

The first quarterfinal round of the playoffs tips off on Easter Sunday, April 8, while Swans open their series against BC Vienna on Monday. Swans finished the second part of the season as regular season winners with a 23-7 record while Vienna grabbed the second playoff spot from the H2 section with a 12-16 mark.

Having already locked up the top seed in the playoffs, Gmunden won their final game before the post-season, knocking off UBC Carefuel Güssing Knights 78-60.

“I am very happy that nobody got hurt,” said Swans coach Mathias Fischer. “It was a positive close to the season. We only lost seven times, and I am very proud of how this team developed.”

Swans and Vienna split their two games this season with both teams winning at home.

Xion Dukes Klosterneuberg secured the no. 2 seed in the playoffs – and a date with BSC Raiffeisen Fürstenfeld – by beating Wels on the road, 79-69, thanks to 17 points and 11 rebounds by Ramiz Suljanovic, and extending their current winning streak to four games for a 21-9 record.

“We deserved to lose. Klosterneuberg is a title candidate for me. And they proved that again today,” said Wels coach Pete Miller about Klosterneuberg, who won the first section of the season but had lost five games before the most recent winning streak.

Klosterneuberg swept the two games against Fürstenfeld this season.

The third seed is ECE Bulls Kapfenberg, who improved to 21-9 with an 84-80 win at home over Oberwart and will face Güssing in the first round. The Bulls went 4-0 against the Knights during the season, winning the first three games each by 11 points and the most recent matchup on March 11 by one point in Güssing.

“This was a good finish to an excellent regular season. We are confident going into a difficult quarterfinal series against Güssing Knights,” said Kapfenberg general manager Michael Schrittwieser.

The most heated showdown in the playoffs will likely be fourth seeded Wels against five seed Oberwart. The teams split the season series with all four games being won by the home team. The closest margin was seven points, the game won by the Gunners on March 12.

With the loss to Kapfenberg, Gunners head coach Neno Asceric has seen his team drop their last four games. Regardless, the defending champs are looking forward to the playoffs.

“We still are going into the playoffs with a good feeling. We are ready to beat Wels,” said Asceric.

Before the playoffs tip off Easter weekend, however, the Austrian All Star Day will take place on Wednesday April 4.

The All-Star Day will also include a dunking contest with Gmunden’s Reggie Arnold, BC Vienna’s Bryant Matthews, Larry Gordon and Jeremy Fears of Kapfenberg, Todd Brown from Wels, and Mike Hauer from the second-division team Sportunion Harreither Amstetten Falcons.

Apr 4, 2012ballineurope
Powered by Sidelines
Share on FacebookShare on Twitter
This post was published on April 4, 2012
News from Lebanon: Mohammad El Akkari goes for 113 points in a single gameMarco Bellinelli: “Chris Paul is the best PG”, “I want to stay in the NBA”